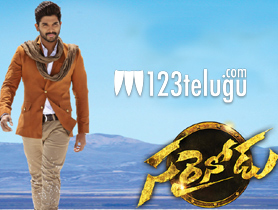 The wait is finally over as Allu Arjun’s mass entertainer, Sarrainodu has released all over with massive fan fare. Directed by Boyapati Sreenu, let’s see how this film turns out to be.

Gana(Allu Arjun) is an ex-military officer who comes back home to do good for the society. One fine day, he helps an entire village and also saves Maha Lakshmi(Rakul Preet) without knowing that she is under a threat from the very powerful Dhanush( AadiPinisetty).

An upset Vairam Dhanush, sets for Gana who is busy with his own life and is about to get married to Hansita Reddy(Catherine Tresa). Rest of the story is as to how Gana faces Vairam Dhanush and saves his entire family.

Firstly, credit should completely go to director Boyapati Sreenu for showcasing Allu Arjun in a complete makeover. Right from the first frame, it is Bunny and his stunning screen presence that steals the show completely. One can easily say what a fine actor Bunny is turning out to be off late. He sheds his lover boy image and transforms himself into an angry young man with Sarrainodu. Be it his dialogue delivery, mannerisms and dances, Bunny’s hard work clearly shows on screen.

Sarrainodu wouldn’t have had the required punch if it was not for Aadi. The young actor looks menacing as the bad guy and plays his character with aplomb. The way his role is showcased and the way Aadi confronts Bunny in many scenes is just superb. First half of the film is very entertaining and the interval bang will surely give you an adrenaline rush.

With Sarrainodu, you can see Rakul the actress and not the star. Catherine too is convincing as the MLA. Srikanth does his supporting role well. After a long gap, Brahmi’s comedy clicks nicely and gives enough comic relief. All the action sequences need a special mention and the way they have been conceived is just superb.

Sarrainodu has a pretty weak story line and does not have anything good to boast about. After a thumping first half, the proceedings get bogged down towards the last fifteen minutes. As the heavy duty emotions and action sequences are already done by then, the makers are forced to end the film on a predictable note.

The characterization of Bunny, his father and Srikanth looks jaded most of the time until the climax. The way Bunny’s character is forced to end up with Rakul Preet by sacrificing Catherine looks a bit unconvincing. The film has too much violence which might not go well with family audience. The makers should have added some more confrontational scenes between Aadi and Bunny to elevate the proceeding even more.

Thaman should be credited big time for his thumping music score. All the songs are a major bonus and his superb background score elevates the film big time. Dialogues are good and so was the art direction. Production values by Geetha Arts are superb as the film looks very rich in visuals.

Coming to the director Boyapati, he has done a superb job with the film. The way he has elevated both Bunny and Aadi looks quite refreshing. Even though he chooses a routine story line, the way he has targeted the mass audience and given them the necessary dose is superb. If he could have handled the last fifteen minutes of the film well, the end result could have been even better.

On the whole, Sarrainodu is indeed a Oora mass entertainer. The film has many elements which will enthrall the fans and mass general audience. Bunny’s stunning transformation, Aadi’s screen presence and amazing action sequences are huge assets. If you are OK with too much violence and manage to bear the last fifteen minutes, you can happily watch Sarrainodu, which will end up as a typical masala entertainer this summer.