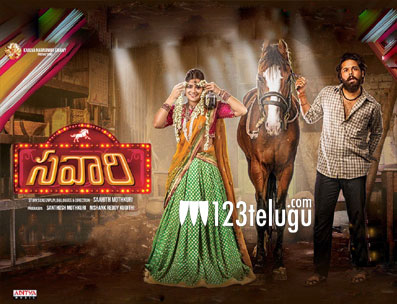 Nandu has pinned a lot of hopes on his new film Savaari that has hit the screens today. Let’s now see whether the film gives Nandu his much-needed hit in his career.

Raju (Nandu) is a poor boy who lives with his horse (Badshah) and earns money through it. One fine day, he comes to know that Badshah is suffering from a rare disease and needs surgery which will cost him a lot of money. This is also the time when he falls in love with Bhagi (Priyanka). One fine day, Badshah goes missing and tension starts building in Raju’s life. What problem does Badshah have? Where did it go away? What will happen to his love story? That forms the rest of the story.

Hero Nandu is the major highlight of the film and has rediscovered himself with Savaari. Till now, he has only done soft roles but with this film, he proved that he can also suit mass roles as well. His emotional outburst and sincere take towards the role is the best part of the film. He is a very good actor who should be utilized more often by the Telugu cinema.

Heroine Priyanka also does a good job in her role. Her mass avatar is very good and she has a very impressive screen presence. The two hit songs have also been shot well on screen and make for a pleasant watch. The main villain Srikanth Reddy is superb and his comic angle has been tapped well in the film. The way he evokes serious yet comic emotions is good.

The film does not have a strong conflict point and has been narrated on a dull note. The emotions showcased in many areas are fake and do not hit you hard. Even though the first half has some good track of the lead pair, the latter half goes for a toss with many logics going for a toss.

To make things breezy, the love scenes have been extended which look over the top and boring. There is no seriousness in the film and that is the reason, the film looks silly in many areas. There was a good scope to elevate emotions between Nandu and his horse Badshah but the director failed to make full use of it.

The concept chosen by the director sounds good on paper but his execution is not up to the mark. He does not elevate the conflict point and the emotional angle he showcased was also not up to the mark. The camerawork of the film is also superb and showcases the rustic locations superbly. The production values of the film are pretty good and so was the editing. Shekhar Chandra does well with his music score and the dialogues have also been written well.

On the whole, Savaari does not live up to all the hype and has a strictly few moments going it’s way. The lead pair’s track along with Nandu’s performance are good but the lack of strong conflict points and repeated scenes take down the film in no time making it a dull watch this weekend.