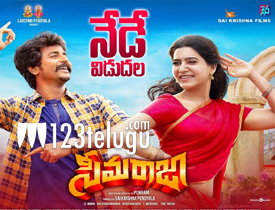 The Samantha and Shiva Karthikeyan Tamil entertainer, Seema Raja has been dubbed in Telugu with the same title. Directed by Ponram, let’s now see how the film turns out to be.

Seema Raja(Shiva Karthikeyan) is a wealthy rich man who wastes money like water just for his false prestige. On the other hand, in another village, Krishnaiyya is a corrupt rich guy who keeps creating problems between the two villages. This is the time Seema Raja falls in love with his daughter Lakshmi(Samantha). Upset with this, Krishnaiyya creates even bigger problems. Rest of the story is as to how Seema Raja solves all these problems and wins his love.

Shiva Karthikeyan is the major plus point of the movie. He has a superb screen presence and does well throughout the film. Performance wise, he did well in the two different shades he portrayed on screen.

Samantha is top notch as the village belle. She looks gorgeous and her chemistry with Shiva is top notch and refreshing to see on screen. The flashback that comes during the second half is good. The VFX work done on the scenes showcased is very good. Soori evokes a few good laughs here and there.

One of the major drawbacks of the film is the problematic screenplay which is shaky and has no direction. The entire first half has no story and the proceedings wander here and there just for the sake of it.

The second half is started well, but once again things go out of hand and create problems for the audience. Even though Simran does a good job in her role, her character is not established well and loses steam after a while.

There are way too many silly scenes in both the halves which could have been avoided. Songs keep coming in one after the other boring the audience.

Imman’s music is disappointing and even more horrible was his background score which was way too loud. Camera work is top notch as the Tamil locales have been showcased in a beautiful manner. Editing is pathetic but production values are very good. Coming to the director Ponram, this is his third film with Shiva Karthikeyan but this time things do not work for him. His screenplay is weak and has nothing new to showcase in the film.

Seema Raja is a film which is filled with Tamil nativity. Though the concept looks decent, the boring narration and unnecessary commercial elements spoil the viewing experience of the audience. Except for the lead pair’s chemistry and some comedy, this film has nothing interesting going it’s way. Avoidable.