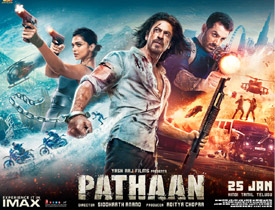 It’s been more than 4 years since Shah Rukh appeared on the big screen in a leading role. His big film Pathaan, which created humongous hype with its promos, has finally hit screens today worldwide. Let’s see whether the movie lived up to the hype it created or not.

Pathaan, a brave Indian soldier, is a part of JOCR (Joint Operation and Covert Research) led by Nandini (Dimple Kapadia). The brave spy is on a mission to stop a rogue agent Jim (John Abraham), and his team, Outfit X, from attacking India. Pakistani doctor Rubina Mohsin (Deepika Padukone) helps Pathaan in finding something called ‘Raktbeej,’ which Jim is looking to destroy India. But things change as Deepika takes sides. Who is Rubina? What’s Raktbeej? Who is Jim, and why did he want to destroy India? Did Pathaan succeed in his mission? The main movie has all the answers.

Pathaan has King Khan Shah Rukh Khan, the unique selling point of the movie. It’s been many years since audiences watched him in an action movie. Pathaan delivers what exactly SRK fans want. The story is fine, and what makes the movie a neat one is its narration.

Shah Rukh Khan, as a brave Indian soldier, looks terrific in action. His style, swag, and his witty punches are worth watching. Besides, Deepika Padukone gets a meaty role, and she also gets into the fight against the enemies of the nation.

The one who needs to be appreciated is John Abraham. His look and actions make him a stylish villain. With this film, he proves that he can pull even an antagonist role with so much ease. The face-off scenes between SRK and John make audiences glue their eyes to screens.

Dimple Kapadia, as Nandini, head of JOCR, delivers a neat performance. She is subtle and elegant in her given role. Ashutosh Rana also gives his best.

The way director Siddharth Anand connected Pathaan’s story with War, and Ek Tha Tiger is impressive, and the next installment in the YRF Spy Universe is going to be a blast for sure. Salman Khan’s entry and scenes between him and SRK are whistle worthy. The action scenes in aesthetic locations look incredible.

Pathaan has everything that fans want from their favorite actor Shah Rukh Khan. Siddharth Anand writes a decent story, but it could have been a lot better. Though the narration makes up for it, more meat was required as far as the story is concerned.

The VFX is bad, especially in the action sequences. The action scenes look so unrealistic just because of poor VFX. In a few scenes, audiences need to forget about logic to enjoy the magic.

Pathaan will be more interesting if the emotional scenes work out well. Unfortunately, the film has very few emotional scenes. Patriotism-related scenes should have been written in a better way to make audiences feel the characters’ emotions.

The interesting yet funny part is Dimple Kapadia has more screen presence compared to John Abraham. The movie would have been mesmerizing if the antagonist’s character had more scenes that could give more details about his past.

Siddharth Anand does a neat job both as a director and writer. But it is the story that needed more care. The dialogues are good. The cinematography is excellent, and so is the score. Production values are okay. VFX could have been better, and the editing is fine.

The score, specially composed for the antagonist’s arrival, is good. The action choreographers need to be praised for putting their blood, sweat, and tears into the film.

On the whole, Pathaan is a high-octane action thriller that has Shah Rukh Khan’s finest performance, Deepika’s glamour, and John Abraham’s villainy. Barring a few over-the-top action scenes, the film is quite enjoyable. So without any thoughts, you can enjoy this action-packed thriller this weekend.