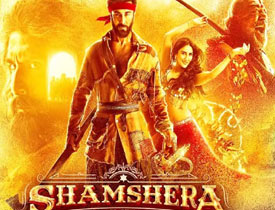 Bollywood superstar, Ranbir Kapoor has teamed up with Karan Malhotra of Agneepath fame for the period action drama Shamshera. The film was carrying a good buzz and it has hit the screens today. Let’s find out if the movie has lived up to its expectations or not.

In the fight between Mughals and Rajput’s, Khamerans get affected. Eventually, they become slaves and continue being ill-treated by the British regime. With no option left they become burglars snatching away wealth from the upper caste. To handle this situation, Britishers come up with a treaty of compromise with Khamerans by taking the help of Shuddh Singh, a Police officer (Sanjay Dutt). Shamshera (Ranbir Kapoor) who leads the Khamerans accepts this. Britishers catch hold of Khamerans taking advantage of their situation and cheats them. To save his people, Shamshera sacrifices his life. Malla (Young Ranbir) the son of Shamshera takes up his father’s job. What happened to Khamerans? Did Malla fulfill his father’s wish? This forms part of the rest of the story.

Ranbir Kapoor is terrific as both Shamshera and Malla. His screen presence, energetic performance, and body language are a treat to watch on the big screen. The entire film runs on his shoulders. There are hardly any scenes without him.

Few action sequences designed in the film need a special mention. The train episode which comes in the pre-climax gives goosebumps. The VFX is too good. Vaani Kapoor looked glamorous and is decent in her role.

While there are many weak points, the significant one to start with is the storyline. The film’s plot is very routine with a beaten-to-death formula. It makes us predict every scene of the film. There isn’t a single scene that looked novel.

Neither of the halves is engaging and the film is filled with many boring elements. Even the emotional aspect isn’t treated well. The film reminds us of many films. To put it clearly, it is a blend of four to five-period dramas.

Sanjay Dutt’s character is way badly written. His acting and dialogue delivery irritates to the core. The film is very lengthy and it doesn’t seem to end, testing the patience levels. Being a routine fare, had the film been crisp, it could have changed the fate slightly. Sadly that didn’t happen here. The dubbing is not that good too. Other artists are wasted in their roles.

Technically the film is brilliant. Yash Raj Films is known for its product quality and the same is evident on screen. The film is mounted on a lavish scale. The art director did a very fine job.

The music is decent. But the background score is poor. It doesn’t elevate the action scenes. The cinematography is good. Though the VFX work in the film is appreciable, it doesn’t help the fact that the film lacks the basic soul. The climax is another disappointment that is dragged way too much.

Coming to director Karan Malhotra, he has chosen a routine script and his narration is clueless. He included many boring elements making the film unbearable. He failed big time in handling a star like Ranbir and this is a missed opportunity.

On the whole, Shamshera is an intolerable and tedious period drama. It has Ranbir’s terrific performance in dual roles, but that couldn’t save this sinking ship. Director Karan Malhotra offers a mundane period drama with no exciting elements. You can skip this film.