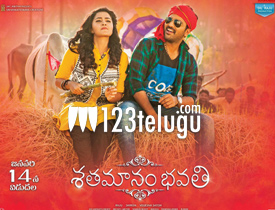 The last release of the Sankranthi season, Shatamanam Bhavati has finally hit the screens. Starring Sharwanand and Anupama Parameswaran, this film is produced by Dil Raju. Let’s see how the film turns out to be.

The movie is set in the backdrop of a small village called Atreyapuram. Raju garu(Prakash Raj) lives a peaceful life along with his wife(Jayasudha) and grandson Raju(Sharwanand). The only thing which bothers him is the fact that his sons and daughter, who live abroad hardly visit him.

Upset by this, he makes a clever plan and calls back his entire family during the Sankranthi festival. The twist in the tale arises when Raju garu’s wife finds out about her husband’s plan and gets upset big time.

This is also the time when small disturbances creep in within the family and create a tense situation. What is Raju garu’s actual intention? Why did he make that plan? What went wrong in the family? To know answers to these questions, you need to watch the film on the big screen.

One of the basic plus points of the film is the clean entertainment that the film has. The family drama looks quite natural and every character is designed as one amongst us. Unlike his previous films, Sharwanand plays a very lovable role and impresses with his subtle performance and screen presence.

Anupama Parameswaran does not let go of the golden chance and gives a striking performance. Her pairing with Sharwa and the couple’s chemistry looks quite pleasing. As expected, the hit pair of Prakash Raj and Jayasudha carry off their roles with aplomb. Their experience and screen presence brings a lot of depth to the strong emotions that are conveyed in the film.

Naresh gets yet another interesting role and is impressive in his character. The climax is also a good asset to the film. The way family values are showcased during this time will go down well with the every section of the audience.

Family dramas like these do not have much in terms of storyline. The same is the case for Shatamanam Bhavati as there are not many interesting twists in the film which can keep you hooked.

The plot is very thin and predictable for most part of the film. There are certain comedy scenes in the film which look quite forced. Pace of the film gets bogged down slightly during the second half and things start getting a tad boring with routine scenes.

Music by Mickey J Meyer is superb as all the songs have been shot wonderfully. Camerawork needs a special mention as the visuals look quite colorful. The small town set up, romance and all the basic emotions have been wonderfully showcased by DOP Sameeer Reddy. Editing is just about okay and the production values of Dil Rjau are top notch. Dialogues are simple yet quite meaningful.

Coming to the director Satish, he has done a good job with the film. Even though he chose a very routine and outdated storyline, the way he has showcased the importance of family bonding and respect towards your loved ones needs to be appreciated. Had he made the proceedings even crispier during the second half, the outcome would have been even better.

On the whole, Shatamanam Bhavati is a clean family entertainer which showcases the various emotions that parents go through when their loved ones stay away from them. Strong family bonding, lively atmosphere, and natural performances are basic assets. If you ignore the routine and outdated story line, this film has some very decent moments which you can enjoy with your entire family this festive season.