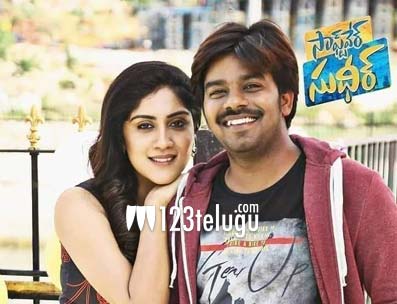 Jabardasth fame, Sudigali Sudheer has come a long way in his career and has now turned hero for the first time with the film Sofware Sudheer. The film has hit the screens today and let’s see how it is.

Chandu (Sudigali Sudheer) is a software engineer who falls in love with Swathi (Dhanya Balakrishna). Just when they decide to marry, things take a u-turn and the couple finds out that Chandu has a problem with his horoscope and can get killed at any moment. To avoid this, they approach a Swamiji who orders for a special pooja. Just when they happen to go for this pooja, Chandu gets involved in a scam featuring a minister. What is wrong with Chandu’s horoscope? Who is this minister? What does he have to do with Chandu? and how does Chandu comes out of his problems is the story of the film all about?

The first half of the film has been designed well and has some interesting scenes. The manner in which the astrology factor is connected to the story and how the hero gets involved with it is shown in a neat manner. The various scenes that showcase this angle have been executed well.

Sudigali Sudheer makes an impressive debut as a hero. He impressed big time with his dances and has a good screen presence. He had two variations in his role and Sudheer portrayed them well. His performance in all the tense scenes in the first half was very good. Dhanya Balakrishna was also good as Sudheer’s love interest. She has a good role and shares striking chemistry with Sudheer. They looked good as a pair in all the songs.

A key twist featuring the minister in the second half has been executed well. The entire film mostly runs of Sudheer and he does the best to hold the film for the most part. Indraja was impressive as Sudheer’s mother and so was the supporting cast.

The director had a decent story and narrated it well through the first half. But it is the second half where things go down as the proceedings lose their grip. A flashback is showcased and many scenes as to how the hero woos the heroine are showcased wasting a lot of time.

One would expect good comedy from Sudheer but that is missing in the film. The so-called office comedy showcased is also not good. As the director wastes too much time in establishing the love story, when the actual twists come, he had no time and hurried the film in the last ten minutes which spoils the mood of the audience.

The production values of the film are pretty good and the camera work showcases the film in a neat manner. Music by Bheems is good and so was his background score. Dialogues written were decent and so was the production design of the entire Swamiji set up. Editing is just about okay as many scenes featuring the office set up could have been easily chopped off.

Coming to the director Rajasekhar Reddy, his concept and story look exciting and he manages things well in the first half. But it is the second half where he does not provide any entertainment even though there was good scope for it and ends the film in a hurried and logicless manner.

On the whole, Software Sudheer is a good launchpad for Sudigali Sudheer and he proves his mettle as a solo hero with his impressive dances and performance. The first half of the film is good but things fall flat in the second half and make a good script gone wrong kind of a scenario. The expected comedy is missing as the story is serious and has a social angle towards the end. If you ignore the first twenty minutes in the second half, the film can be given a shot but do not expect anything exciting as the film is devoid of all that and ends as a crime thriller in the end.