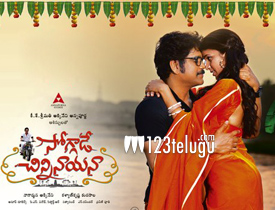 Akkineni Nagarjuna always comes up with interesting films in his career. This time around, he brings you a complete family entertainer in the form of Soggade Chinni Nayana. After a huge round of promotions, this film has hit the screens today. Let’s see how it turns out to be.

The story of the film is based in a native village of Andhra and is set amidst the family of late Bangara Raju(Nagarjuna). The film opens up with Bangara Raju’s son, again played by Nagarjuna and his wife (Lavanya) who are on the verge of taking a divorce. The couple reach their native village and confront their problem to Bangara Raju’s wife Satya(Ramya Krishna).

An upset Satya locks herself in the room and confronts this to a huge portrait of her late husband. Satya reveals to him that she has landed in huge problems after his death and pleads him to do something about this. Rest of the story is to how a dead Bangara Raju comes back to life and solves all his family’s problems.

It is so good to see Nagarjuna in an author backed role after such a long time. Soggade is Nagarjuna’s one man show as the script, character and look suits his real life persona big time. Nagarjuna is at his wittiest best and floors the audience with his looks and mesmerizing act. He has shown good variations in both his roles, and his chemistry with Ramya Krishna and Lavanya is simply stunning.

Yet another basic asset of the film is the family orientation which will connect to one and all. The rustic locales, subtle romance and feel good songs, which are a rare sight in this day and age have been executed well. Ramya Krishna is superb in her role and looks gorgeous even at this age.

Credit should go to the director for etching out all the roles in a beautiful way. Every character has equal importance and the way they gel with the story line is pretty good. Lavanya is apt in her role and brings a decent effect to the proceedings with her traditional avatar.

Anasuya impresses in her cameo and has stunning screen presence. First half of the film is quite lively and has good family emotions and comedy. Nasser and Sampath are decent in their roles.

Conflict point of the film is a bit simple and has nothing much interesting to offer. Pace of the film during the second half drops a bit as certain scenes sidelined to the main plot.

Music of the film is hugely impressive as all the songs are quite soothing and have also been shot quite nicely. Production values are top notch and the excellent camera work only adds to the grand village visuals. Dialogues are quirky and suit the mood of the film well. Screenplay of the film is quite simple as the makers have played to the galleries and added scenes which will be liked by one and all.

Coming to the director Kalyan Krishna, he has done a superb job with the film. Right from the first frame, he draws your attention with some wholesome entertainment and presents Nagarjuna in an entertaining manner. Even though his story is quite simple, the way he has narrated the film with decent family emotions is what makes this film tick.

Whenever Nagarjuna has done entertaining roles, films have always clicked. Same is the case with Soggade Chinni Nayana which is a complete family entertainer. Nagarajuna’s live wire performance and some very neatly executed family emotions are huge assets for this film. Barring the slow pace during the second half, this film ends up as an enjoyable watch for every section of the audience this Sankranthi season.