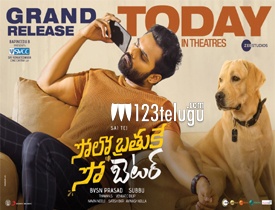 Solo Bratuke So Better is the first big film that has released on the big screens post the lockdown. Starring Sai Dharam Tej and Nabha Natesh, the film has released with the support of the entire film fraternity. Let’s now see how the film is going to be.

Virat(Sai Tej) is a man who lives by the principle Solo Bratuke So Better. But as time passes by, he comes to know how important marriage is. In a key turn of events in his life, Amrutha (Nabha Natesh) enters the scene. This time, Virat wants love but Amrutha is strictly against it. How Virat manages this tricky situation is the whole story of the film.

Sai Tej looks handsome in the film and perfectly suits his role. He has improved by leaps and bounds with this film and is at ease in all the emotional and romantic scenes. The comedy generated through his character is pretty good in the first half.

Nabha Natesh enters the scene only in the interval block and does well. She tries to hold the scenes well but her role is not that etched properly. Rao Ramesh is impressive in his cameo. Sayta’s comedy punches and mannerisms are quite good.

The first half is quite impressive with neat logic of wanting to stay single. Vennela Kishore is a major attraction during this time with his comedy. Well composed songs and breezy scenes keep the audience engaged. The whole plot and interval bang nicely set the tone for a good second half.

After a very breezy first half, the pace drops in the second half. The emotional connect is also missing in the film during this time. When the director focused so much in letting the hero understand why marriage is important, he sadly doesn’t focus much on the heroine. With just one scene, she gets convinced about her love towards the hero.

Also, some more good scenes should have been there as to why the hero is not interested in marriage in the beginning of the film. With such good comedy in the first half, things fall short in the latter part.

If the makers would have added more fun and enough romance, things would have been different. Also, the climax is hurried and things are wrapped up in a jiffy which looks odd as the viewer is waiting to see if there is something else that is coming.

One of the biggest assets of the film is Thaman’s music. All his songs are superb and create a good vibe in the film. The camera work, lyrics and production values are top notch. The fun dialogues are good and so was the editing.

Coming to the director, Subbu, he has done a passable job with the film. His story idea is pretty good and execution was also amazing in the first half. But things fall apart in the second half as he loses grip on emotions and rushes up the scenes and the climax.

On the whole, Solo Brathuke So Better is a romantic comedy that clicks in the first half and slows down in the second. The film is a big screen experience and has clean comedy. Though the story and emotions are predictable and climax is rushed, the film ends as a passable watch this weekend.