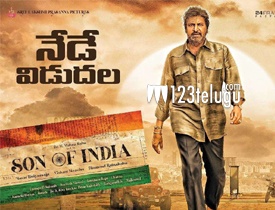 Collection king, Mohan Babu is back after a long gap with a film called Son of India. The film is out today and let’s see how it is.

A noted central minister, renowned doctor, and a government officer get kidnapped and the government appoints an NIA officer (Pragya Jaiswal) to crack this case. After a series of investigations, it is made clear that a temporary driver (Mohan Babu) in the same NIA headquarters is behind these kidnappings. Who is this driver? What is his flashback? and what’s his goal? To know the answers, you need to watch the film on the big screen.

It was good to see Mohan Babu after a long time. Even at this age, he is fit and has a solid screen presence. He mouths amazing dialogues and carries the entire film on his shoulders. Mohan Babu is particularly good in the climax where he mouths a lengthy monologue.

The second half which shows the key flashback is neat and has interesting family emotions. Meena, Posani, Srikanth, and others do their small roles quite well. Also, the manner in which the private jails angle is told looks good.

Most of the key characters are not shown in the film as Mohan Babu himself is highlighted. This is executed as an experiment that fails badly. The storyline is good but the execution is disappointing.

Director Diamond Ratna Babu had a good script but he spoilt it with his silly narration which fails logically as well. The narration is outdated and if he had a gripping screenplay and showcased the other characters from the beginning, the film would have made a lot of sense.

Music by Ilayaraja is not that great but the BGM was good. Dialogues are pretty good and elevate some acenes. The camera work is okay but the production values are good. Editing is crisp as the film has a neat runtime.

Coming to the director Diamond Ratna Babu, he has only managed to showcase Mohan Babu in a good way. But his direction is old school and does not showcase anything new. What could have been a good thriller is spoilt by inefficient narration.

On the whole, Son of India has Mohan Babu’s solid performance . He is very good in his role and brings some depth to the film. But sadly, the other factors in the film fail to support him and make this movie an outdated and boring watch.