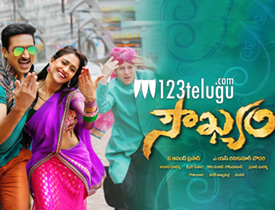 After the lukewarm response to Jil, Gopichand has played it safe by choosing a family entertainer like Soukhyam. Directed by Ravi Kumar Chowdary, this film has Regina as the female lead and has hit the screens today. Let’s see how it is.

Seenu(Gopichand) is a happy go lucky guy who falls in love with Sailu(Regina). He keeps wooing her and right by the time Sailu agrees to his proposal, her family members kidnap her and fix her marriage with a corrupt politician’s son.

Twist in the tale arises when Seenu’s dad asks him to stay away from all this mess and move ahead with his life. Seenu promises his dad to do so but some how manages to rescue Sailu from this tricky situation. How does he manage to do all this is the entire story all about.

Gopichand looks extremely handsome and plays his part quite well. He has improved with his emotions and is now at ease with the boy next door image. Regina looks ok and performs to the best of her capabilities. Production values are good and some comedy scenes during the first half are ok.

Sahukar Janaki is good in her tiny role during the first half. Chemistry between Gopichand and Regina is also decent. Interval bang and the pre-interval fight have been designed well.

Sivaji Raja, Raghu Babu and 30 years Pruthvi manage to evoke some laughs in the film. Posani is pretty good in his role and is the only saving grace in the first half.

Right from the story, execution and twists, everything is so routine and boring that you exactly know what is going to happen in the next scene. Even though the first half has some moments, the love track has been dragged way too much and makes things tedious.

It has become a habit to introduce special characters like 30 years Pruthvi with spoofs of hit movies these days. But this time around, things fall flat and the episode featuring Pruthivi, Krishna Bhagvan and gang looks out right cheap and out of place.

None of the villains in the movie fit their roles. The family emotions, bond between the parents and necessary elevations scenes, everything goes for a huge toss in the film. Climax is out right boring and Brahmanandam’s entry and the whole song and dance formula during this time gets on to your nerves big time.

Surprisingly, Anup Rubens’s music is below average and so was the background score. As said earlier, production values are good and all the songs have been shot well. Dialogues are ok and so was the art direction. Editing was so bad that at least twenty minutes of the film could have been easily chopped off.

Coming to the director Ravi Kumar Chowdary, he looses the plot after the first fifteen minutes. Not once during the film does he manage to evoke any interest and his entire approach towards the film is half hearted. He uses the beaten to death formula and throws scenes at you which are bland and make absolutely no sense. Kona Venkat and Gopi Mohan’s screenplay is a disaster yet again as the proceedings go without any direction whatsoever.

On the whole, Soukhyam is one of the most routine and cleashed films which has come out in the recent past. Even though the makers have tried hard to induce some commercial elements and comedy, nothing seems to work and the movie falls flat in every department. You can safely ignore this movie and look for any other good release which will be out on this Christmas eve.