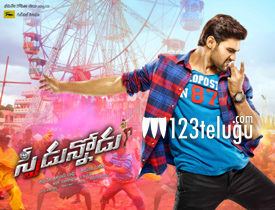 Bellamkonda Srinivas impressed everyone with his all round skills in Alludu Seenu. After a long gap, he is back with his latest film Speedunnodu. The youthful entertainer which is directed by Bheemineni Srininvasa Rao has hit the screens today. Let’s see how the film turns out to be.

Shoban(Bellamkonda Srinivas) is a happy go lucky guy who goes to umpteen lengths for his friends. He has a batch of five friends and one among them always tries to woo the village beauty Vasanthi(Sonarika) but ends up failing each time.

Left with no choice, Shoban takes things in hand and decides to help his friend. But during this process, Vasanthi falls for Shobhan. As these situations are showcased in quite a funny way, twist in the tale arises when Vasanti’s father(Rao Ramesh) fixes his daughter’s marriage to one of Shoban’s best friends Jagan (Kabir Singh).

Rest of the story is as to how, Shoban clears all his problems among his friends and wins his love.

The way story has been weaved around five friends is pretty good. Probably for the first time, hero’s friends have some powerful roles in a Telugu film. Bellamkonda Srinivas is impressive in his second outing. The way he has carried his role and gives an all round performance is appreciable. He has worked hard on his strengths and will surely be a promising actor in the future.

Second half is where the film moves on a fast pace. The twist that is showcased during the climax is good and has been handled in a interesting way. Tamanna’s song is a huge plus during the end and has also been shot quite richly. Comedian Madhu gets a meaty role and does his best. Chaitnya Krishna and Prakash Raj do their characters as required.

As the film is based on friendship, there should be few more scenes which showcase the bond between the close friends. The story does not move at a brisk pace during the first half. There was scope for more comedy as the makers have failed to utilize it.

Even though Sonarika looks good on screen, her role and performance should have been better. As the story revolves around her, a little bigger star could have made wonders to the film. Post the interval, the film gets routine with some unnecessary family emotions.

Music of the film is pretty impressive as all the songs sound good and have also been shot quite lavishly. Background score is also nice and elevates the film to a decent level. Editing is ok but a song featuring the comedian Satya could have been removed. Production values are superb and the camera work succeeds in showcasing the film as natural as possible.

Coming to the director Bheenineni, he has done a decent job with the film. He has showcased the young hero pretty well and has also set the film in a decent tone. Had he increased a bit of comedy and elevated the friendship bond further, the output would have been even better.

Overall, Speedunnodu has an interesting story line which is set well in a rural set up. Bellamkonda Srininvas impresses with his all round skills and does his job pretty well. Interesting twists during the climax and lavish songs are huge assets. Barring a few dull moments during the first half and lack of emotional bond between the friends, this film can be given a shot for its overall package.