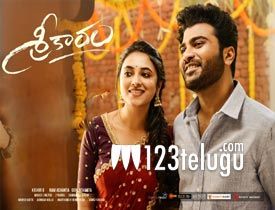 Sharwanand’s Sreekaram created a positive pre-release buzz thanks to the impressive promos. With Chiranjeevi, KTR, Ram Charan, Prabhas and others joining the promotions, the film has become a hot favourite among the Maha Shivaratri releases. Let’s see how the film fares.

Karthik (Sharwanand) hails from a poor farmer’s family in a village near Tirupati. He works at an IT company in Hyderabad. Chaitra (Priyanka) is his colleague and she tries her best to make him fall in love with her.

But Karthik has a mission. He quits his high-salaried job and returns to his village with an aspiration to bring back the lost glory to the farmers and agriculture. The challenges he faces in convincing the villagers to return to agriculture and his inspirational success story as a farmer is what Sreekaram is all about.

While the sensitive and emotional story is the soul of Sreekaram, Sharwanand as Karthik is the driving force. The earnestness in his performance and dialogue delivery (he is impressive with his Chittoor dialect) will make the audiences feel for his character and thus the story and the inspirational message it delivers.

Priyanka Arul Mohan looks beautiful and plays a bubbly young girl who sacrifices everything to share her lover’s ambition. Her character gains more significance in the second half.

Rao Ramesh as Sharwa’s father, Naresh as a helpless farmer who works as a daily wager in the city, Sai Kumar as an antagonist who schemes and snatches away the villagers’ agricultural lands are terrific in their roles. Comedian Satya succeeds in tickling audiences’ funny bones several times. Rest of the actors are equally good in their roles.

The love track featuring Priyanka and Sharwa in the first half and the cinematic narrative of the farmers’ triumph in the second half are the main weaklings in an otherwise effective and moving film. The film also lacks a strong conflict. Sai Kumar as the antagonist is only functional and doesn’t add to the conflict much.

Especially, after setting high expectations on the second half with a heavy-duty first half, the way Sharwa and his team of farmers achieve success by overcoming all the impending odds has been dealt with in a simplistic manner. If achieving success in farming was that easy, would the agriculture sector in our country be in such a sorry state?

Director Kishor B makes a solid debut. He has come up with an emotionally moving story that is centred around the plight of farmers and successfully delivers an inspirational message. However, after penning such strong emotions in his script, he need not come up with that slightly long love track in the first half and dilute the narrative, even though it’s apparent that he is doing it to cater to all sections of the audience.

The dialogues penned by Sai Madhav Burra, especially in the emotional scenes depicting the farmers’ plight, are heavy and haunting and take the audiences back to their roots.

Music by Mickey J Meyer is yet another major winner in Sreekaram. Be it the songs or the background score in emotional scenes, the music touches your heart and leaves you with a heavy feeling in the end. Cinematographer Yuvraj brilliantly captures the scenic beauty of village life. Senior editor Marthand K Venkatesh is in his element in the second half where he sticks to the narrative. However, he should have trimmed down the love track that dilutes the story’s proceedings in the first half. Art direction by Avinash Kolla and the production values by the makers are pretty good.

On the whole, Sreekaram has its heart in the right place. The film successfully delivers an important message and leaves you with a haunting feeling in the end. Barring the unwanted extension of the love track in the first half and the simplistic manner in which the film showcases the farmers’ victory in the end, Sreekaram is a film that’s well made and inspires today’s youths.

Shah Rukh Khan’s acclaimed yesteryear social drama, Swades, inspired several movies across the country. Sreekaram is one such movie that manages to strike a chord quite effectively. Films like Sreekaram will connect you with your roots and remind your humble beginnings. Audiences patronizing Sreekaram will only mean that they are giving a tribute to their fathers and forefathers who relentlessly toiled in agriculture for generations.