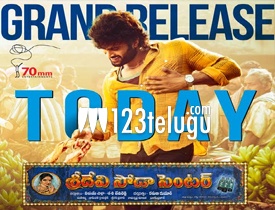 Sridevi Soda Center was being promoted in a big from the last few days. The film is finally out on the big screens now and let’s see how it is.

The film is set in Amalapuram and is about a couple Sooribabu(Sudheer Babu) and Sridevi( Anandi). Sooribabu is an electrician who falls for Sridevi. But the caste issue erupts and the couple is thrown into problems by Sridevi’s father(Naresh) and the village heads. How will Sooribabu survive his problems is the basic story of Sridevi Soda Center.

The shocking scenes executed in the second half are neat as emotions, performances, and drama is engaging at this time. The film has an unusual ending and this has been thought of well by the director.

Senior actor Naresh steals the show wih his negative role. He shows his versatility and gives a remarkable performance as heroine’s dad. His character is filled with hatred for the lower caste and Naresh has showcased his hate in a wonderful manner. Satyam Rajesh is decent in his supporting role.

Anandi is also apt as the heroine and does well in the second half. She is a natural performer and does well in all the emotional scenes with Naresh. Pavel, who played the main villian was also impressive and suited his role well.

Last but not the least, Sudheer Babu once again proved what a good actor he is. In this film, he got good scope to showcase his allround skills and Sudheer does so well. Be it the emotional scenes or the action part, Sudheer Babu has surely moved one step ahead in his career.

One of the biggest drawbacks is the dull first half. The love story is weak as the chemistry in the couple is missing during this time. In a way, you can say that the drama and intensity between the couple should have been highlighted even more to make a solid impact by the end.

Also, the first half is lengthy and dragged for no reason. Raghu Babu plays hero’s dad and he is completely forgotten when hero is going through so much trauma in his life. The first half also needs a bit of editing and scenes related to the love story should have been added.

As the film is about honor killing, scenes related to that should have been added from the beginning itself to make the situation better for the audience.

Music by Mani Sharma is decent but his BGM was quite effective. The production values are top notch and the camerawork showcases the small town set up in a solid manner. The film needs trimming of at least ten minutes. Production design is also impressive.

Coming to the director Karuna Kumar, he has once again taken the caste angle post his debut film Palasa. If that film was deeply rooted, Sridevi Soda Center has a bit of commercial angle. The director’s narration in the drama department is perfect but he did not develop the love story effectively and this is a major drawback.

On the whole, Sridevi Soda Center is small town romantic drama with a good backdrop. The rustic characters, amazing climax and impressive performances are basic assets. On the flip side, the film has a dull first half and just a passable love story. If you ignore these aspects, the film has some engaging moments to look out for and makes up for a decent watch.