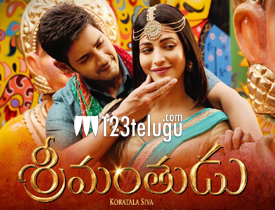 Whenever there is a Mahesh Babu film on the cards, the entire industry sits up and takes notice. Srimanthudu is Mahesh’s biggest release till date and has opened all over today. Also starring Shruthi Haasan, this film is directed by Koratala Shiva. Let’s see how it is.

Harsha(Mahesh Babu) is the son of a multi-millionaire named Ravikanth(Jagapathi Babu). He is quite simple in life and shares different ideologies to his father. One fine day, he meets Charusheela (Shruthi Haasan) and gradually falls in love with her.

Twist in the tale arises when Charusheela rejects Harsha’s proposal and reveals him a shocking truth about his native place and its problems. An upset Harsha, now sets on a personal mission to his village and encounters Sasi(Sampath) and his gang who are troubling the villagers big time.

Rest of the story is as to how Harsha’s personal mission becomes a revolution and helps the villagers grow and prosper in the future.

Let’s start by talking about Srimanthudu’s emotional content. The film is quite heavy on moral values and giving back to the society. Credit should go to Koratla Shiva for sticking to the content and sending out a strong message through hero’s character. Mahesh is majestic in his role and gives his career best performance. His role is tailor made and Mahesh carries the entire film on his shoulders. He looks dashing as a college student and the way he brings out varied emotions during the second half is a class apart.

Shruthi Haasan gets a meaty role and is quite decent in the film. Her pairing with Mahesh looks fresh and brings novelty to the film. Jagapathi Babu is a royal in his role and gives the added edge to the film. The way his character is etched out and all his confrontation scenes with Mahesh are superb.

First half of the film is quite vibrant and has some very classy moments. Second half has emotional undercurrent and Koratala Shiva manages to bring out superb performances from all his artists. Rajendra Prasad is quite pleasing in his character. Production values of the film are quite good and showcase the film in a rich light.

One of the drawbacks of the film is the pace as the proceedings take their own time. There are certain village scenes which could have been edited to make the film crisp. Even though the story is quite novel, it is also slightly predictable in nature.

Sukanya is wasted in her role and does not get any screen space. Ali and Vennela Kishore are under utilized and could have been elevated more to generate some entertainment. Climax of the film is hurried up as the proceedings are wrapped up in a simpler way.

DSP’s music is pretty good and grows on you once you watch his songs on screen. But it is Devi’s background score which elevates the film to another level. Dialogues are novel and will connect with the common man quite easily.

Coming to the director Koratala Shiva, he has done an awesome job and showcased Mahesh like never before. The way he brings out a settled performance and presents Mahesh in an emotional avatar is quite endearing. Shiva narrates the film without any unnecessary commercial aspects and injects some meaningful family moments which will surely go well with everyone.

On the whole, Srimanthudu is a stunning emotional family drama which will hit the right chords with one and all. Mahesh Babu’s career best performance and a novel concept are huge assets. Barring the slightly predictable nature of the film, Mahesh’s fans can rejoice as their superstar makes a come back with a vengeance and thoroughly entertains from the word go. Finally, a simple, clean and meaningful family entertainer which is set to rule the box office in the coming weeks. A Must Watch.