Review : Singam 3 – Only for action lovers 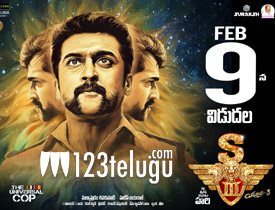 Singham 3 has been facing all sorts of troubles to see its release light. After being postponed for over three months now, the action entertainer has finally hit the screens today. Let’s see whether it gives Suriya some much-needed relief.

Narasimha(Suriya), who is quite popular as an aggressive cop is deputed to Mangalore to deal with a special case involving the murder of a police commissioner. Upon landing in Karnataka, Narasimha easily cracks the murder case but finds out that there is a dreaded mafia don called Vittal(Anoop Singh Thakur) behind all this.

At the same time, Narasimha also finds out that Vittal is managing his nexus from Australia and is creating huge problems all over. Rest of the story is as to how Narasimha manages to nab the international criminal Vittal and where do Shruthi Haasan and Anushka feature in this entire set up.

As always, one of the biggest assets of Singham series is the man Suriya himself. Even in the third installment, Suriya packs a punch and his performance will be loved by the fans and masses. Be it his fights, aggressive dialogue delivery and electrifying screen presence, Suriya holds the entire film with his impressive performance.

Shruthi Haasan gets a meaty role and does well in the acting department. Coming to the villain Thakur Anoop Singh, he makes an impressive debut and gives a tough competition to Suriya. Also, credit should go to director Hari for showcasing the villain in a very stylish and menacing manner.

The action sequences need a special mention as they have been designed in quite a racy way. They look real, especially those designed in the second half elevate the film quite well.

The basic backdrop of Singham 3 is the same like its previous parts. Story wise, one should not expect much as the film has the same context of a powerful cop solving a high profile case. The only difference is that the villain and the scale of the film are quite huge. There is nothing new about the storyline as things are quite predictable most of the time.

The film has many traces of the second part as multiple scenes quickly remind you of Singham 2. There are a few scenes throughout the film where logic goes for a toss. Comedy track in the film is not that good and does not help the proceedings much. Too much of action episodes many not be liked by a certain section of the audience.

Singham 3 has superb production values. The film has some great visuals and the makers should be lauded for going all out and not compromising on the look of the film. As said earlier, action choreography looks real and boosts up the proceedings. Harris Jayraj’s music is the biggest drawback of the film. None of his songs impress one bit. Editing is just about okay but the dialogues written for Suriya are quite good.

Coming to the director Hari, he has done an okay job with the film. Even though he increases the scale of the film, the core emotion which was the highlight of the earlier 2 parts is surely missing in Singham3. He has just taken the same old storyline and has made things look grand. Narration wise, there is nothing much to rave about his direction.

When you talk about the Singham series, you instantly get reminded of Suriya’s rocking cop avatar and action packed fights. Well, Singham 3 has all of this but there is nothing novel or special to rave about. The story, concept, and execution are the same as previous parts but Suriya once again holds Singham 3 with his superb performance. The action entertainer will mostly be liked by the masses and hardcore action movie lovers. So, go in well prepared as there is nothing much that you have not seen before.