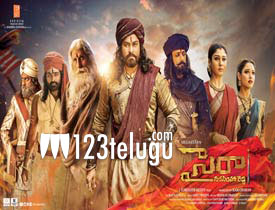 The big moment which we all were waiting for is finally here. Megastar Chiranjeevi’s dream project, Sye Raa has finally hit the theaters after a superb pre-release hype. Let’s see whether the film lives up to all the hype or not.

The film is based in 1846 when the British Empire is troubling the Indians and taking away all their hard owned income. Renadu is a place in Rayalaseema that does not bend down to the atrocities of the British and one man, Narasimha Reddy(Chiranjeevi) stands tall in his revolt against the British. Well, how did he fight? Who all supported him?and what happened in the end? That forms the rest of the story.

The first and foremost thing that hits you with Sye Raa is the sheer scale of the film. Kudos to Ram Charan for putting a project in such a huge magnitude. The sheer size of the film, star cast, grand visuals, and terrific VFX take it a notch higher.

Sye Raa has always been a dream project for Chiranjeevi and he has lived in his role as Narasimha Reddy. Be it his body language or agility as a freedom fighter, Chiranjeevi has shown it all. His performance in crunch emotional scenes is truly award-winning. Chiru’s outburst in the climax will bring tears to many. Amitabh Bachchan is neat in the role of a guru.

Tamannaah is neat in her sacrificing role and has a terrific screen presence. Nayanthara was apt as Chiranjeevi’s wife. Both the heroines bring a good star value to the film. The fights composed are superb and create good fan moments. Jagapathi Babu gets a superb role and is terrific in the film. Vijay Sethupati makes his presence felt. Kiccha Sudeep does well in jealous king’s role.

The second half is where all the action happens. The war scene and thrills showcased take the film to another level altogether. The climax is the biggest asset as it evokes good emotions and patriotism for the audience. The camerawork by Ratnavelu is amazing and gives the film a lot of grandeur. Anushka’s cameo is neat and has been set up well.

The film has several thumping episodes in both the halves and gives the fans the right moment to rejoice. The way Chiranjeevi cuts the head of a British soldier and several such scenes elevate the drama well. Brahmaji, Ravi Kishan and other stars do their supporting roles well.

The film is started on a thumping note with Anushka’s entry but Chiranjeevi’s love story and some routine love scenes slow the film for some time. Things get bogged down until the last 25 minutes of the interval block.

The story is quite simple as only the revolt is showcased through the film. Some fights and thrills with the British empire have been exaggerated a bit to make it too cinematic.

Music by Amit Triveni is good as none of the songs create any disturbance in the film. But it is the background score of Julius Packiam which takes the film to another level. He has given a superb score to all the fight sequences.The dubbing done for all the key British characters and other roles is superb and gives authenticity to the film.

The production design, set work and money spent by Ram Charan shows in every scene of the film. The costume design by Sushmita is superb as the styling is apt and showcases the bygone era well. Dialogues by Sai Madhav Burra are terrific and raise the emotions to another level.

Coming to the director Surrender Reddy, he has given his life and soul for this movie and has not wasted the big opportunity given to him. The way he has showcased the megastar and made every actor a good part of the narrative is superb. He has narrated the film in a grand manner and evoked superb emotions at the same time. The second half and the way he ends the film with an emotional note will bring tears to many. With this film, he will get into the big league of directors.

On the whole, Sye Raa is a superbly made patriotic drama that hits the right note with its emotions, performances, and narration. Chiranjeevi leads from the front and gives a stellar performance. Though the film starts a bit slow, it picks up supremely well and gives the audience an emotional rush throughout. Box office wise, the film will do extremely well and Ram Charan has surely made his dad’s dream come true by making Sye Raa a must watch this festive season. Go for it.