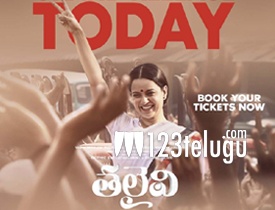 A teenaged Jayalalithaa (Kangana Ranaut) reluctantly agrees to act in Tamil movies upon her mother’s (Bhagyashree) insistence. She plays the leading lady opposite the legendary Tamil actor MG Ramachandran (Arvind Swami) in her maiden film. Love blossoms between MGR and Jayaa during the making of the film. Their pairing becomes a huge hit and they continue to act together in numerous movies.

However, MGR distances himself from Jayaa when he decides to step into full-fledged politics. Due to the pain of separation, Jayaa goes low-key and also starts losing film opportunities. In a dramatic turn of events, MGR welcomes Jayaa into his political party. Through her selfless work for poor students, Jayaa earns the famous moniker ‘Amma’ and rises in politics in no time.

But MGR’s tragic demise lands Jayaa in countless hurdles as she faces humiliation within the party and even from the opposition party headed by Karunanidhi (Nasser). Thalaivii chronicles Jayaa’s inspirational rise in the male-dominated political world and pays tribute to her glorious legacy as an iconic leader and ends when she becomes Tamil Nadu CM.

Arvind Swami as MGR is impeccable in his looks and performance. In a film that mainly belongs to Kangana Ranaut, Arvind Swami steals the show with his towering presence and terrific act. Kangana Ranaut as Jayalalithaa is impressive especially in the second half of the film where she effectively portrays Jayaa’s helplessness and indomitable courage as a firebrand leader.

Seasoned actors like Nasser and Samuthirakani drive the narrative with their riveting performances. The rest of the actors also played their part well. Jayaa’s life was full of glorious ups and forgettable downs. The screenplay highlights all those memorable incidents in her life and elevate her heroism and also creating an emotional high. The second half that explores Jayaa’s political journey is the main backbone of the film.

Jayalalithaa’s acting career has a memorable connection with Telugu Cinema. However, the makers didn’t show any references to her Telugu movies with NTR and Shoban Babu etc which would have helped Telugu audiences connect to the film better.

Surprisingly, for such a prestigious project, the makers chose to get Kangana’s voice dubbed by two different voice actors. While one voice dubs for the breezy and light-hearted scenes in the first half, the second half is dubbed by another voice-over artist and this creates a confusion. Also, the makers should have taken proper care with regards to Kangana’s prosthetics. She looked odd in scenes that featured her as a chubby Jayaa.

Director AL Vijay scores brownie points for his deft handling of the two real-life film and political greats of Tamil Nadu, MGR and Jayalalithaa. He extracted the best out of Arvind Swami and Kangana Ranaut.

Like most biopics, Thalaivii too follows the same-old narrative structure. So, the proceedings run on a target predictable note. Most of the incidents that occurred in the iconic leader’s life are well known to her fans and common people. The film hardly offers anything new in this aspect.

GV Prakash Kumar’s rousing background score is one of the major highlights of Thalaivii. He literally elevated even a few routine scenes with his score. However, none of the songs manage to create a lasting impression.

Cinematography by Vishal Vittal is quite impressive. He sets the mood right by making the period setting look authentic. Anthony’s editing is apt and goes in tandem with the narrative. The film is made on a decent budget, and the production values can be felt on the screen.

Thalaivii is an emotional retelling of Jayalalithaa’s illustrious journey from being a reluctant actress to the dramatic events that forced her into politics and finally becoming an ‘Amma’ to crores of her fans and Tamilians. The film pays a perfect tribute to Jayaa’s glorious life and persona. Barring the routine screenplay template, you may enjoy this biopic for its author-backed performances by all the lead actors. And if you are an admirer of one of the iconic chief ministers of India, then Thalaivii is a good watch.