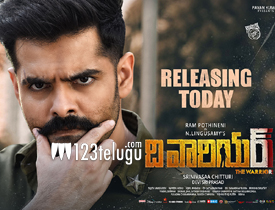 Star hero, Ram is doing’s back to back mass films and for the first time, he has turned into a cop with his new release ‘The Warriorr’ which has hit the screens today. Let’s see how it is.

Satya(Ram) is a duty-minded doctor who gets posted in the city of Kurnool which is under the rule of a dreaded gangster Guru(Aadhi Pinisetty). He tries to revolt against Guru but fails badly. Left with no choice, Satya changes track and turns into a cop. How did a doctor become a cop? What did he do in his new avatar? That forms the rest of the story?

The basic transformation of Ram from a doctor to a cop has been showcased quite well. Generally, in any cop film, the logic goes for a toss. But here in The Warriorr, director Linguswamy has made sure that the film does not have over-the-top elements as the scenes flow in a proper manner.

Aadhi Pinisetty is one of the major pillars of the film and he as Guru has killed it with his performance. Be it his look or dialogue delivery, Aadhi is top-notch and dominates Ram in the first half. Nadia as Ram’s mother is decent in her role.

The climax fight between Ram and Aadhi has been executed well. Krithi Shetty looks pretty and sizzles in the songs. Brahmaji is also neat in his role and makes some sense in the end. The BGM composed for Aadhi is quite good.

Last but not the least, Ram is quite good in the film. He plays both a doctor and a cop and showcases the difference in his characters quite well. He is subdued in the first half but makes up for it in the latter part with his dances and aggressive performance. The cop role suits him quite well.

When you take up a cop story, there is nothing much new to showcase content-wise. So, one needs to narrate the film in a gripping manner. Though the first half is written well by Linguswamy, the second half has the same good versus bad storyline.

Lingusamy is known to make action films in a particular style and has done the same with this film. Though the narration is decent, it does not arrest you much with its screenplay. More hero villain elevations should have been added from the first half itself.

Music by DSP is pretty good and the songs have been choreographed quite well. More than the songs, DSP’s BGM is pretty impressive. The production values are pretty good as the camera work nicely captures the Rayalaseema setup.

Coming to the director Linguswamy, he has done a passable job with the film. Though he does not show anything new, he gives the masses what they expect from a cop drama. Credit should go to him for not adding over-the-top and logic-less scenes. He just narrated the film in a routine template without going overboard.

On the whole, The Warriorr is a masala cop drama that has some impressive mass blocks. Ram and Aadhi Pinisetty hold the screen with their impressive act but the story is a bit routine and quite predictable. If you are okay with this aspect and like to attempt a mass film, The Warrior can be happily given a shot at a single screen.