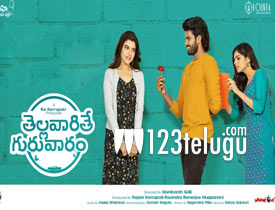 Keeravani’s son, Sri Simha is back with his new film Thellavarithe Guruvaram. The film is out today and let’s see how it is

The film starts with the wedding festivities of Veeru(Sri Simha) and Madhu(Misha Narang). The stage is set for an early morning wedding but both Veeru and Madhu are not interested in getting married as they have their own set of issues. What will they do now? Will they run away? What about thier parents? To know what happens, you need to watch the film on the big screen.

The storyline of the film is pretty good. A couple who is forced to get married without their interest fall in love at their own wedding. This set up is quite interesting. The comedy angle created is also neat in the first half.

This is Sri Simha’s second film and he has improved by leaps and bounds. Be it his looks, body language or dialogue delivery, he is pretty impressive in this film and does a good job in all the emotional scenes. Heroine Chitra Shukla is good in her role but her character is not etched properly.

Misha Narang is neat as the innocent bride and does well in all the emotonal scenes. But one of the major assets of the film is comedian Satya. He is hilarious and evokes superb laughs whenever he is on screen. His situational comedy track is brought in well in the proceedings. The second half has some emotions that are showcased through the heroine’s angle.

As said earlier, the film has a good story but the narration is not that gripping. The film had so much scope to evoke more drama, romance and comedy but that does not happen and everything is unleashed on just a so-so note.

Chitra Shukla’s character graph is not handled well. Why she is getting edgy in love, why she said no to the hero, all this should have been explained in a better way in the first half to create more impact.

The initial part of the second half is slow. Time and again, the film is filled with predictable scenes which hamper the flow and makes things boring. The climax is also wrapped up in a jiffy and looks forced.

The production values of the film are top notch. As the film happens mostly at the night time, the camerawork is amazing and showcases the film in a good light. Editing is not that great as some routine scenes should have been chopped off to make things gripping. The production design and the wedding setup is good.

Music by Kaala Bhairava is just about okay but his BGM is pretty impressive. Coming to the director Manikant, he has done just an okay job. As he is inexperienced, he could not make use of the story and could not elevate the conflict points effectively. But the comedy angle in the film was handled well by him.

On the whole, Thellavarithe Guruvaram is a film that has a good premise and decent performances. But the conflict points are not elevated well and due to this, the film gets boring and slow in many areas. If rom-coms are your forte, give this film a shot but there is nothing exciting to watch out for in this film and ends as a below par watch this weekend.