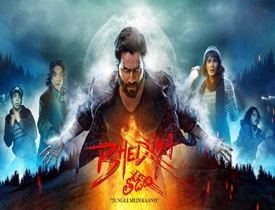 Bollywood star hero Varun Dhawan has now come up with a unique concept film Bhediya. The film is dubbed and released in Telugu as Thodelu by Geetha Arts. Kriti Sanon is the female lead. The film hit the screens today, and let’s see how it is.

Bhaskar (Varun Dhawan), a civil engineer and a road contractor, gets a road project in the interior forest area of Arunachal Pradesh by convincing his boss. He pledges his assets as a guarantee and moves to Arunachal Pradesh along with his cousin JD (Abhishek Banerjee). After reaching there, Bhaskar gets bitten by a wolf which makes him evolve into the creature gradually. He is taken to the veterinary doctor Anika (Kriti Sanon) for treatment. Did Bhaskar become normal? What sort of challenges did he face due to this? Were JD and Anika able to save Bhaskar? Watch the movie to know the answers.

The film’s concept is unique, making it the first creature-comedy film in India. The makers need special applause for trying something different. An even more good thing is roping in a star hero for this subject which surely boosts the range of the film, and thus the casting was spot on. A good number of thrilling moments and sequences have been conceived with perfection.

Varun Dhawan gave an award-worthy performance by portraying the Bhaskar role to perfection. As a person bitten by a wolf, he gave a fantastic performance and beautifully emoted the pain inside him. There was a lot of physical transformation needed for the role, and one can easily notice the efforts put in by the actor for the film. Kriti Sanon, as Anika, got a nice role and gave a good performance as well.

The story is set nicely from the starting scene without wasting much time. One more biggest advantage of the film is its entertainment quotient. We get a fair amount of comedy portions in both halves that will tickle our bones. The entertainment was carried throughout, and whenever the film went off track, the makers tried to balance it with humor.

Abhishek Banerjee, who did some serious roles in the past, got a chance to show his comedy angle here. As Varun’s cousin, he is superb, and the actor evoked good laughs with his expressions and dialogues. The actor’s capability is nicely used by the makers here in terms of humor. Others also were good in their respective roles.

The film has its share of flaws too. The movie gets slow in a few places, and there are also a few boring scenes that could have been trimmed down. Especially in the second half, the tempo comes down, and then the momentum picks up only from the pre-climax.

One would expect more depth in the proceedings after a good first half, but that wasn’t maintained after the interval. The key twist of the movie could have been executed in an even better fashion, and it becomes easily predictable due to the addition of a couple of scenes. The makers could have omitted these scenes for the surprise element to strike a chord.

Also, the movie becomes a bit routine toward the end, and hence the overall feel of the film comes down a bit. The violence portions were heavy, and a scene, particularly in the first half, was irritating to see.

The movie’s VFX is nicely done, and the 3D effects were also exquisite. The 3D effects were stunning in a few scenes, enhancing the viewing experience. These scenes were nicely supported by the background score of the Sachin-Jigar duo. The songs were fine. The Telugu dubbing was nicely done.

The cinematography by Jishu was good in capturing the forest and lovely locations of Arunachal Pradesh. The editing is just about okay. The production values are fine. Coming to director Amar Kaushik, he did a decent job with Thodelu (Bhediya). The way he mixed the entertainment angle into this story was nice, and the way he incorporated a social message in the film seemed good. However, he could have been careful regarding the vital twist and the second half, which restricted the film’s overall range.

On the whole, Thodelu is a one-time watchable film backed by a social message. Varun Dhawan’s spectacular performance, comedy scenes, and supporting cast are the main advantages. But, on the flip side, slowness in places, a bit of predictability, and a below-par second hour are its flaws. Regardless, the fun and message portions make the film a decent watch this weekend.