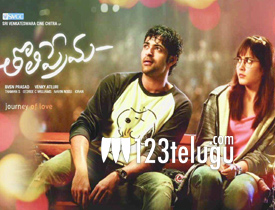 Varun Tej is back with yet another love story after the super successful Fidaa. Titled Tholi Prema, this film has hit the screens today. Lets see how it is.

Tholi Prema is the story of Aditya(Varun) who meets Varsha(Raashi Khanna) on a train to Hyderabad from Vishakapatnam and instantly falls for her. The couple get separated and meet again in college. Their love story starts there and faces some hurdles due to continous arguments. How they resolve their issues and make their love win forms the crux of the movie.

Both Varun and Raashi perform exceptionally well in their roles. Varun looks good in the first half and is extremely stylish in the second. He has improved by leaps and bounds and proves that when it comes to love stories, you can’t think of anyone else but him for such roles. His character has a lot of variations and Varun showcased them beautifully.

Raashi Khanna is amazing as Varsha. Perhaps it is her career best role and she nails it in every which way and showcases the actress in her. Raashi gets some very good dialogues and delivers them spot on. Priyadarshi and Hyper Adhi get lengthy roles in the second half and entertain thoroughly.

Suhasini, Naresh, and other friends are decent. The movie looks pretty good in the first half with some amazing romantic scenes. The car scene where the couple kiss each other has been executed quite well. There are a few dialogues in the first half and few in the second that are well-written and are the soul of the movie. Songs have been picturized quite stylishly.

The story of the film is quite routine. Lovers having a tiff in the first half and resolving that in second half has been dealt with in many movies.

The second half starts off well but takes a predictable route during the later part where the film slows down a bit and this might not go well with regular audience.

Thaman is the unsung hero of the film with his music score. You cannot imagine the film without him as his music and background score takes the film to another level. Camera work steals the show completely as the visuals are superb. Especially the second half which is set in London looks super class.

The production values are uncompromising and that makes the movie look rich in every scene. The screenplay of the movie is superb as the proceedings are showcased in a neat and mature manner making the film look complete.

Coming to the director Venky, even though he takes a simple story, the way he has narrated it with breezy romance and ample comedy make things work. He makes a strong debut and his talent is clearly visible through his neat writing and the way he blended the emotions in today’s age and time. He is surely a director to watch out for in the future.

On the whole, Tholi Prema lives up to all the expectations and wins you over. The breezy romance, decent comedy and striking emotions are huge assets for the film. The story of the film is ages old and does not have major twists making it a bit difficult for the masses. But the film will do exceptionally well among the youth, A centers and overseas as the mindset and class narration will impress them completely. Go for it.