Review : Tholi Premalo – Has its moments 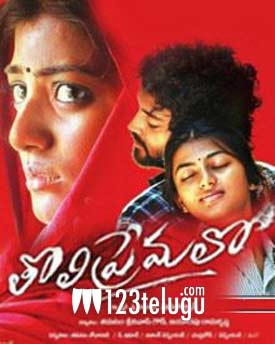 Award winning Tamil director,Prabhu Solomon is well-known to Tollywood with his films Prema Khaidi and Gajaraju. His super hit Tamil film Kayal has been dubbed into Telugu as Tholi Premalo. Let’s see how the movie fared.

Aaron (Chandran) and Socrates (Vincent) are good friends. Ardent lovers of traveling, they toil hard for six months, earn and tour the entire country for the rest of the year.

One fine day ,Aaron falls in love with Kavery (Anandi) in one of his journeys. However, the couple is separated quickly because of an unexpected twist. The rest of the film is about where their love story leads them to.

The interesting backdrop in which the film is set in is the major plus point of Tholi Premalo. How a tsunami brings in the twists and turns in the lead pair’s love story adds the feel good factor to this love saga.

The film’s first half is yet another plus point. The comedy scenes in the zamindar’s bungalow are hilarious. The film’s hero Chandran justifies his role with an impressive performance.

Telugu girl Anandi is quite good and makes a lasting impression with her beauty and performance. Hero’s friend Vincent shines as the sidekick.

The second half is a major minus point. The story ends during the interval itself as the proceedings get boring. Even the love story between the lead pair lacks clarity.

Songs act as major speed breakers to the film’s narrative. The second half is completely filled with songs which mar the viewing experience. Heroine’s characterisation lacks clarity.

Director Prabhu Solomon sets a love story amidst an interesting backdrop. While he impresses with the first half, his weak screenplay in the second half lets the whole experience go down the drain.

Mahendran’s realistic cinematography is spectacular. Imman’s songs are good and his background score is particularly impressive. Samuels’ editing is adequate. The visual effects are decent considering the low budget. Sashank Vennelakanti’s dialogues are quite evocative.

Realistic Tamil love stories have always been welcomed by Telugu audiences. Tholi Premalo is yet another such realistic love drama which has an interesting backdrop and good first half. However, a lackluster second half spoils the viewing experience leaving the audiences with a half-hearted feel in the end.