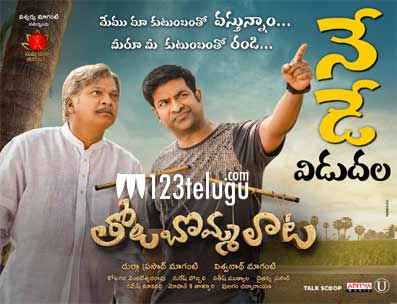 Tolubommalata is a film that has been promoted a lot in the last few days. The family drama has hit the screens today and let’s see how it is.

Sodala Raju(Rajendra Prasad) is a well-known man in his village. His last wish is to get his granddaughter and grandson settle down in life. The twist in the tale arises when Sodala Raju passes away all of a sudden. He comes back as a spirit and finds it disturbing to see his family quarreling for his property. The rest of the story is as to how Sodala Raju takes the help of Vennela Kishore and settles down all the disputes.

The family emotions are pretty decent. The manner in which today’s generation are money minded and is only bothered about their own well being has been showcased well. The emotional angle between Rajendra Prasad and his kids has been elevated well.

Rajendra Prasad is good in his emotional role and holds the film. Yet another major hero of the film is Vennela Kishore. He is there throughout and provides decent comedy. His scenes with Rajendra Prasad and chemistry with the senior actor is quite good. Director turned actor Devi Sri Prasad did well in his negative role.

Hero Vishwant is decent in his role. Comedian Dhanraj gets a good role in the film. Heroine Harshitha is pretty impressive looks wise and did her crucial role well. The film starts on a good note and has some good emotions during this time. The first half is better when compared to the second.

The story is ages old and has nothing new to showcase. The setup, characters, and narration is all old school. Not that it is bad but such concepts have come so many times. The film comes to the break point on a decent level but is spoilt completely in the second part.

The lead pair’s flashback, comedy scenes that come during this time sidetrack the film. Some more efforts should have been put in to make the film serious and family emotions could have been added. But the director went the commercial route and added unnecessary scenes which derail the film.

The production values of the film are impressive as the village set up and house sets have been established well. The camera work is decent and brings a realistic touch to the film. Suresh Bobbili’s music is decent and so was his background score. Editing is below par as the first fifteen minutes during the start of the second half could have been easily chopped off. Lyrics are good but the dialogues are even better.

Coming to the director, Vishwanath Maganti, he has chosen a very old school story line for the film. His execution of the emotions is pretty good but he too fell pray for commercial aspects and makes the film silly. The proceedings are quite routine and have nothing new to showcase. He extracted good performances from his cast but the story is quite old.

On the whole, Tolubommalata has some decent emotions but the story and proceedings are old fashioned. Such stories have come out many a time in the past. Vennela Kishore’s comedy, and an emotional climax are basic assets. On the flipside, this family drama lacks novelty and has nothing new to showcase.