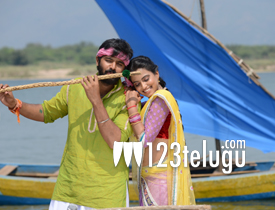 Producer Sai Korrapati, has been associated with some meaningful films in the past. His latest presentation is the village drama Tungabhadra which has hit the screens today. Let’s see how it is.

The story of the film is based on the lives of two faction groups in the Karlapoodi village of Guntur district. Sivaramakrsihna(Satyaraj) heads one group and always faces opposition from Trimurthulu(Chalapathi Rao) and his sons. On the other hand, Srinu(Adith) is an aggressive young disciple of Sivaramakrishna who falls in love with his daughter Gauri(Dimple Chopde).

Twist in the tale arises when Sivaramkrishna comes to know about his daughter’s love affair. This is also the time when the enemy group decide to attack Sivaramakrishna. Rest of the story is as to how Gauri and Srinu’s love affair survives all these troubles, and what happens to the gang wars in the village.

Satyaraj is the major asset of the film and gives a decent performance. His expressions and screen presence during the climax is good. Adith Arun is decent in his role but gets limited scope to perform. Dimple Chopde looks apt as a village belle and gels nicely with the story.

The way the entire story has been set up in the rural area looks convincing. Production values are pretty good as the film is showcased in a natural light. First half of the film is ok and has some decent entertainment.

Jabardasth Sreenu and Josh Naveen are very good in their respective roles. Climax of the film has been executed well. All the realization scenes during the climax have been conceived quite well.

Major drawback of the film is the lack of freshness in the script. Stories with a faction backdrop have been dealt many a times in the past. After starting with a positive note, the hero’s character gets deviated and loses direction during the end.

The story of the film kicks off majorly during the second half. Narration is below par as proceedings during this time do not create any effect. Yet another major drawback is the predictable nature of the script. Right from the word go, you are exactly aware of what is going to happen next. The hero falling in love with his boss’s daughter, village politics, every thing looks so outdated.

Emotions showcased have absolutely no impact as all the scenes in the second half are routine. The are many logics which are missing in the film. Certain characters and their approach has not been justified clearly.

Camerawork in the film is quite good and showcases the rural areas supremely well. Screenplay is a huge drawback as none of the scenes create an impact. Music is just about ok but the background score is decent. Dialogues are good and gel with the mood of the film well.

Director Srinivasa Krishna had an interesting line but the way he has executed the film is below par. Not once during the film do you get excited with the proceedings. The way the director has also dealt with the hero’s character lacks focus.

On the whole, Tungabhadra is a below par product from the house of Vaarahi. A decent first half, some comedy scenes and a emotional climax are some assets. On the flip side, a routine story, lag in narration and predictable story line spoils the mood of the film. All those who like rustic village dramas can give this film a shot.