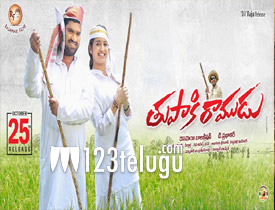 Comedian, Bittiri Sathi has turned hero for the first time with a film called Tupaki Ramudu which has hit the screens today. Let’s see how it is.

Tupaki Ramudu(Satthi) is an orphan who always helps his villagers irrespective of him facing insults. Seeing his good nature, the villagers fix his wedding. But sadly, the girl puts a condition that she will only marry Ramudi if he gets educated in life. Left with no choice, Ramudu approaches Anita(Priya) to help him in his studies. In this process, they fall in love with each other. What will Satthi do now? What will happen to his other marriage proposal? Whom will Satthi marry? That forms the rest of the story.

Bittiri Satthi makes a confident debut as an actor. He dances, fights, and does well in all the emotional scenes. He also mouths the Telangana slang with ease and carries the film on his shoulders.

Yet another highlight of the film is heroine Priya who did a good job in her role. She has good screen presence and did well in her key character. The actors who did the role of Satthi’s friends also did an impressive job. The message showcased in the film is also good.

The basic point of the film is also quite silly. There is no seriousness in the plot and the first half is filled with scenes that have no seriousness at all. Upon this, forced comedy irritates the audience.

Certain scenes created to showcase Satthi in a comic role are bad and have been written in a disappointing manner. There was a good scope to elevate the content with the heroine’s role but he failed to do it. There are many unnecessary scenes that kill the mood of the viewers and make things tedious.

The production values of the film are good. Editing is bad and does not have any seriousness. Lyrics are decent and so was the whole production design. The camerawork was decent and the music was just about okay. Coming to the director Prabhakar, he has done a pathetic job with the film. His narration lack seriousness as he makes a mess of the storyline.

On the whole. Bittiri Satthi’s debut as a solo hero is quite disappointing. Even though Satthi tries hard to entertain, the other factors in the film are boring and have been narrated in a silly and routine manner making this film a below-par flick this weekend. Ignore it happily.