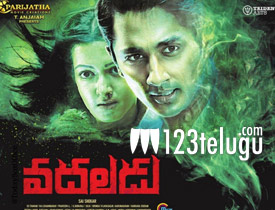 After a long gap, hero Siddharth is back with his new film Vadaladu. The Tamil dubbed film has hit the screens today and let’s see how it is.

Jagan(Siddharth) is a food safety officer who becomes a pain for several business people. He falls in love with a school teacher Jyothi(Catherine Tresa) and when everything seems to be going fine, all those business people who got busted through Jagan start dying one after the other. Why are these business people dying? Does Jagan have anything to do with them? and what is the connection between food safety and Jagan? To know this, you have to watch the film on the big screen.

The basic concept of food safety and how people are suffering from food poisoning looks good. Also, the way the love story is interlaced in the storyline is pretty interesting. Hero Siddharth does a neat job as a food inspector. He is always sincere towards his roles and once again showcases good emotions. His emotions during crunch horror scenes are pretty good.

Catherine Tresa does her wonderfully and is one of the biggest assets of the film. She looks simple and emoted well in all the horror and emotional scenes with a lot of aplomb. Kabir Singh was awesome as the bad guy in the film. Satish and other actors gave their best. The way the food industry operates and how bad food products are recycled has been showcased in a stunning manner.

Though the concept of the film is sound, the screenplay had several problems. The manner in which unnecessary love scenes were induced in the film even if was not necessary, made the film weak in many areas. The so-called horror episodes showcased could not elevate the film well and were routine.

The makers had a good chance to elevate the film in many areas but the director failed to do it. The film is a serious social drama and does not have the basic commercial aspects which many Telugu audience look out for. Except for the interval bang, there are no major twists in the film.

Music by Thaman and his background score were pretty impressive. The camera work of the film is just outstanding as several scenes have been showcased in a very realistic manner. Editing was just about okay as several horror scenes could have been edited out. The production values of the film are top-notch.

Coming to the director Shekar, he has done a decent job with the film. He chose a hard-hitting point and showcased it fairly well. But his screenplay and too many horror scenes played spoilt sport and decreased the viewing experience down in many areas.

On the whole, Vadaladu is a passable social drama that has a good relevant point. The lead pair does a superb job and hold the film well most of the time. But an uneven screenplay in crunch areas and routine horror elements take the film down many a time. All those who like watching different kinds of films and do not mind the serious nature of the subject can easily give this film a shot. The rest can watch when the film when it is aired on TV.