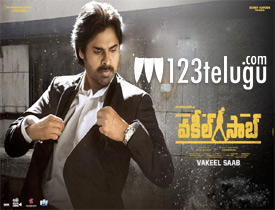 Vakeel Saab is one of the most awaited films of this year as it marks the comeback of Pawan Kalyan to films after three long years. Let’s see whether the film lives up to the hype or not.

Pallavi(Nivetha Thomas) Zarina(Anjali) and Ananya(Ananya) are three close friends who live In Hyderabad and work at different offices. They attend a party and get into trouble with the boys. Incidentally, one of the girls injures Vamsi(Vamsi Krishna). This creates a big mess and a case is filed against the three women. Left with no choice, the ladies approach lawyer Satyadev(Pawan Kalyan) to fight the case against the powerful Nanda(Prakash Raj). Will Satyadev manage to bring justice to the three ladies? That forms the rest of the story.

Pawan Kalyan is back after a long gap and he does not disappoint his fans one bit. Though he looks subdued in the first half, he goes all out and gives a solid performance in the latter part. Vakeel Saab brings out the actor in Pawan Kalyan and the star hero does supremely well in all the courtroom scenes with Prakash Raj. Pawan’s dialogue delivery is also on point in the film.

Pawan’s swag and screen presence are showcased superbly by director Venu Sriram as he has balanced the content with commercial aspects perfectly. Prakash Raj is very good as a criminal lawyer and gives solid depth to the proceedings. Ananya does well as the small-town girl. Vamsi, who played the villain is good along with Mukesh Rishi.

The three ladies need a special mention as each of them has done a good job. Especially Nivetha Thomas and Anjali, light up the second half with their emotional outbursts. The talented actors elevate the women empowerment angle with their performance in a superb way and bring tears to the eyes in the courtroom scenes.

Thaman is also an undoubted hero of the film as his BGM and music are superb. He lights up the second half with his solid score. The screenplay, dialogues, confrontation scenes in the second half are just superb and end the film on a thumping note.

We all know that Vakeel Saab is the remake of Pink and the makers added a flashback and love track to give the film a commercial effect. But this is one of the drawbacks as it derails the film and sidetracks the content.

The first half gets slow in mid portions as routine scenes are thrown at the audience. Pawan Kalyan has hardly anything to do in the first half and fans would be a bit disappointed to see him dull during this time.

Shruthi Hassan’s role has no weight and her makeup looks weird. Her chemistry with Pawan Kalyan also looks forced. So many scenes related to Pawan Kalyan’s political career have been added and they are whistle-worthy. Fans will love it but others will feel as Bhajana.

As said earlier, Thaman has taken the film to another level altogether. Production values of the film are top-notch as the camera work looks realistic. Dialogues need a special mention as they are solid and convey a lot of emotion.

The screenplay is dull in the first half but picks up superbly during the second half. The editing is decent but at least close to ten minutes and one song in the flashback could have been removed for better runtime and good flow of scenes.

Coming to the director Venu Sriram, he has lived up to all the expectations put on him. He has given what fans wanted along with a social message which is relevant in today’s times. He does not tweak Pink much and just adds a small flashback. Though he starts slow with the flashback, Venu lifts the film in the second half and leaves no chance for complaints.

On the whole, Vakeel Saab is an emotional courtroom drama with a good message. Pawan Kalyan makes a solid comeback and gives an outstanding performance. The supporting cast does well and the film has enough commercial elements for the fans. The flashback in the first half is dull and could have been avoided. Barring this, Vakeel Saab ends as a gripping watch this weekend. Go for it.