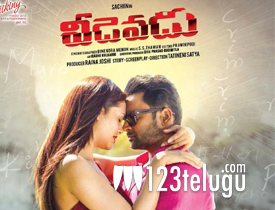 Sathya(Sachiin Joshi) is a professional Kabbadi player who falls head over heels for Shruthi(Esha Gupta). He somehow impresses her and manages to tie the knot. To everyone’s shock, Sathya kills Shruthi during the first night of his wedding itself. What consequences made Satya take this decision? Did he really kill Shruthi? Is there a back story behind it? To know all this, you have to watch the film in theaters.

Sachiin Joshi is okay in his role of an unstable personality and gives a decent performance. Heroine Esha Gupta looks gorgeous and shows decent modulation in her character. Though this is Esha’s first south Indian film, her lip sync for Telugu dialogues is very good.

Noted comedian, Srinivas Reddy entertains in parts. Actor Kishore is too good in his role of an ACP and his intense acting gives some depth to the proceedings. Two songs which come in the first half are good and have been picturized well. The last ten minutes of the film where the actual story is unfolded has been executed well.

One of the major drawbacks of the film is its meaningless narration. Director Tatineni Satya’s concept is okay but he completely failed in executing the film in a gripping manner. After an okayish first half, the second half runs on a flat note without any engaging moments.

Apart from the last ten minutes, the entire second half is a big letdown for the film. Hero playing Kabaddi in the jail and that too with higher cadre officers in an interrogation room looks awkward and over the top.

Editing by Praveen Pudi is okay as he kept the runtime of the film short and crispy. Cinematography by Binendra Menon is very good as his rich visuals in every frame will impress the audience. Music by Thaman is good as three out of five songs are decent. Same is the case with his background score as well. Production values are rich for this Sachiin Joshi’s home production.

On the whole, Veedevadu is a very ordinary crime thriller which has a few high moments here and there. Though the last ten minutes of the film are good, the flat narration and a few illogical scenes may not appeal to a larger section of the audience and make this film a below average watch this weekend. Watch it only if you have enough time on your hands.