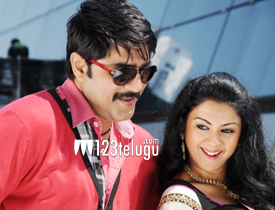 Off late, Srikanth is busy doing supporting roles. His latest film ‘Veediki Dookudekkuva’ has hit the screens today. Let’s watch how the film turns out to be.

Kranthi (Srikanth) is a powerful police officer who can go to any extent to safeguard justice. He destroys every criminal gang which he encounters in his tenure.

One fine day, he comes across Chamundeswari (Kamna Jetmalani) who also happens to be his childhood friend. Soon, their friendship blossoms into love. Chamundeswari does research on temples and for the same, goes to Malaysia. Upon reaching there, she gets kidnapped by a vicious gang.

Why did the gang kidnap Chamundeswari ? Will Kranthi go to Malaysia to rescue her ? and will be successful ? That forms the rest of the story.

Srikanth is the major highlight of the film. The comedy scenes featuring Srikanth, Chandramohan and Krishna Bhagavan entertain the audience big time.

Some scenes during the pre climax are very emotional. Even though MS Narayana’s comedy track is irrelevant to the story, the audience will enjoy it.

Second half is the major drawback of the movie. The proceedings take their own time to move ahead. Srikanth’s characterisation and his dialogues are quite similar to that of Mahesh Babu’s in Dookudu.

The producers have taken a huge risk by selecting this age old story. All the scenes showcased are quite routine and have been dealt with in many movies in the past. Pace of the movie is also a bit slow.

Cinematography of the movie is good and the scenes which are shot in Malaysia are captured well. Production values are not bad. Coming to the music, some songs which are composed by the late Chakri attract the masses. Background score is not effective.

Sathyanarayana Dwarapudi, the director and writer failed in every aspect right from choosing the story to showcasing it on screen. The only place where is does a decent job is the pre climax. Editing is very dull as many scenes in the second half could have been easily chopped off.

On the whole, Veediki Dookudekkuva is lack luster film because of its weak direction and age old story line. Except for some few comedy scenes and pre climax, this movie has nothing much to offer. Watch it when it comes on TV.