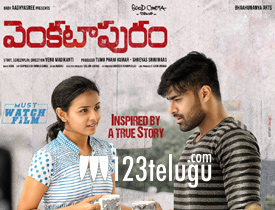 Happy Days fame, Rahul has been struggling to get a proper hit under his belt. Losing no hope, he is back with an intense crime thriller titled Venkatapuram. The film has hit the screens all over today and let’s see whether it gives Rahul his much-needed hit.

The story is set in Vizag as Anand(Rahul) and Chaitra(Mahima) live in the same apartment building. As expected, they become close friends and start developing feelings towards each other.

The twist in the tale arises when Chaitra lands in huge trouble which involves a dreaded gang and a bunch of corrupt cops. Rest of the story is as to how Anand takes things in control and solves Chaitra’s problems one after the other.

One of the biggest plus points of the film is the basic premise of the film. The plot is interesting and the way it has been set up amidst corrupt cops with a suspense theme is quite good. The production values are top notch as the film has a very unique and intriguing look.

Hero Rahul has done a good job in the film. His hard work is clearly visible through his body and emotional outburst during the second half. He suits his role perfectly and gels in the serious role quite well. Ajay does his job well in the second half

Ajay Ghosh is the mainstay of the film as his menacing cop act brings a good amount of depth in the proceedings. The way he has shown his evil side works well for the plot and all his investigative scenes are quite realistic and have been handled well.

Things get bogged down a bit as the love track between the lead pair has not been established well. For the hero to take such serious steps of crime for the heroine, the makers should have shown a deep bonding between the couple.

Even though heroine Mahima looks okay, she has way too much to perform and does not bring the necessary emotions. The film drags in many areas such as scenes like college girls going out for smoking could have been wrapped up even quickly.

The logic goes for a toss in many areas as too many liberties have been taken by the director. There are many questions unanswered such as heroine’s parents dying and how the hero manages all the crimes.

As said earlier, camera work is top notch and especially those aerial shots depicting the city of Vizag look amazing. Achu’s music is very good as all the songs are pretty decent. Dialogues are okay and so was the production design. Editing is decent but there are few scenes which could have been edited during the first half.

Coming to the director Venu, he has done an okay job with the film. He has executed the film quite well on paper but has managed to bring the film alive on screen only to an extent. The way he has maintained the suspense element is quite good. Even though he starts the film on a slow note, he ends it pretty convincingly.

On the whole, Venkatapuram has a decent premise and good suspense elements in the second half. Rahul does well in his comeback film but director Venu’s narration should have been a bit crisp as the film belongs to the thriller genre. If you keep your expectations in check and ignore a few logics here and there, this film can easily be given a shot this weekend.