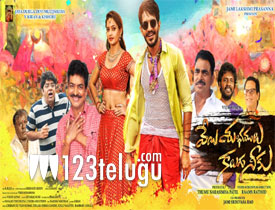 Chaitu(Vijay Raja) works as the Program Director in a famous TV channel. He is already in love with Divya(Tamanna Vyas). Before his demise, Chaitu’s father, Narayana( Shivaji Raja), asks him to get his own house. So, Chaitu buys a bungalow and gets into unexpected problems. He comes to know that a devil lives in the bungalow. How does Chaitu reside along with the devil? Why are devils existing in the bungalow? What’s the whole story. To know the story, watch the film.

The horror effects are impressive and the sentiment angle in the climax is decent. When it comes to performances, Satyam Rajesh impresses with his comedy timing in a few scenes.

Hero Vijay Raja gave his best, especially in the scenes with the devil. Tamanna Vyas did justice to her character. The rest of the cast also performed fine.

The audience who enjoy over-the-top humor might like this flick. But, the majority won’t appreciate this film. The silly drama and action sequences make it more irritating. Many scenes are forced and the climax is not at all convincing. The slow narration and boring scenes kill the interest to watch the film.

Shivaji Raja’s track is not satisfactory. The key scenes in the second half and pre-climax are the major minus points for the film as they are so boring to watch.

Coming to the technical aspects, the director fails to engage the audiences even though he directed a few scenes well. The cinematography is not bad and the music is average. Editing is fine. The production values are good.

On the whole, Veyi Subhamulu Kalugu Neeku is not up to the mark. The hard-to-believe fictional story with a dead slow screenplay gives you an uncomfortable experience. The comedy also doesn’t work making things difficult. Except for a strict few scenes, this movie has nothing much to offer. Ignore it.