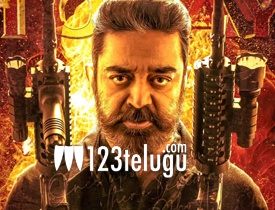 The story of the film is quite interesting as so much detailing has gone into the establishment of the characters. Fahadh Faasil gets a meaty role and he does very well. Though he is mostly subdued, he engages the audience with his emotional performance.

A container filled with heavy drugs goes missing in Chennai. These drugs are owned by Santhanam (Vijay Sethupathi) and he is hugely upset with this robbery. To crack this case, an undercover cop named Amar (Fahadh Faasil) is brought into the scene. Upon investigation, Amar finds out that this robbery and notorious killings by a masked man in the city are linked to a drunkard named Karnan (Kamal Haasan). Who is this Karnan? What is his backstory and how is he involved in this massive mafia setup? To know the answers, watch the film on the big screens.

The story of the film is quite interesting as so much detailing has gone into the establishment of the characters. Fahadh Faasil gets a meaty role and he does very well. Though he is mostly subdued, he engages the audience with his emotional performance.

Vijay Sethupathi is a crowd pleaser and gets the role of a mafia don. Though his dubbing looks odd, Vijay’s facial expressions, body language, and screen presence will be loved by the fans. His confrontation scene with Fahadh Faasil and Kamal Haasan is superb. One of the major assets of the film is Anirudh’s BGM which elevates the second half to another level.

Last but not the least, Kamal Haasan makes a comeback after a long time and he is superb in his action avatar. Though we do not get to see him much in the first half, Kamal packs a punch in the second half and does the action blocks superbly. Fans will just love him in this new avatar.

As we have told earlier, the character establishment is done quite slowly and because of this, the first half is a bit dull. Kamal Haasan is hardly there for ten minutes in the first half as scenes related to Fahad Fasail’s investigation are shown on screen.

Also, the story is not clearly explained during the initial parts of the film. Only when the second half starts, the cards are opened and things get cleared. Though Vijay Sethupathi does well, his role has not that much weight and he looks like any other regular villain in many of the scenes.

Music and BGM by Anirudh are top-notch. The camerawork showcasing the dark theme of the film is quite good. Dialogues are neat and special mention should go to the action which is super stylish and look real as well. The production design is top-notch and the manner in which hero Suriya is brought into the setup looks superb and leaves the audience with a high. The Telugu dubbing is also good and a few scenes in the first half should have been trimmed.

Coming to the director Lokesh Kanagaraj, he has done a good job with the film. There was a lot of hype as to how he would handle three big stars. But Lokesh gave equal importance to all three and brought out solid performance from them. The way he linked up the story of Vikram to his earlier film Khaiti was also good. The icing on the cake is the lead to the next part with Suriya’s entry and Lokesh wins brownie parts for it.

On the whole, Vikram is an action drama that is filled with decent thrills. Though the film starts on a very slow note in the first half, things get into top gear with an action-packed second half and entertain the audience. The icing on the cake is the presence of Kamal Haasan, Fahadh Faasil, and Vijay Sethupathi who make the watching experience enjoyable.