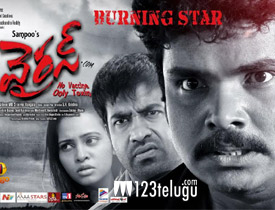 Hrudaya Kaleyam fame, Sampoornesh Babu is back after a short gap with yet another film called Virus which has hit the screens today. Let’s see how it is.

Krishna (Sampu) is a small time employee who works hard and becomes a software employee in the US with the help of a girl called Ananya( Nidhisha). When everything seems to be going fine, Ananya gets killed in some mysterious circumstances. What is the actual reason for Ananya’s death? How will Sampu solve the death mystery? That forms the rest of the story.

Sampoorneesh Babu’s acting and mannerisms will impress his hardcore fans to some extent. His over the top dialogues and buildup shots are fun to watch on screen. Director SR Krishna’s idea of dealing a social issue should be appreciated. Noted comedian Vennela Kishore’s role is a surprise package in the film and it is a major twist in the tale.

Jabardasth Chammak Chandra’s comedy and his dialogues impress in parts. Heroine Nidhisha’s performance is good in her limited screen presence. yet another heroine, Geeta Shah is good looking and her glamor in songs will attract the masses. A social message given in the climax was good.

Though director SR Krishna’s idea of dealing a social issue is good, he miserably failed in executing it. The first half of the film is filled with unnecessary and low-grade scenes which irritate the audience to the core.

Though the second half of the film is comparatively better than the first half, it is also hurried up with improper proceedings. The scenes showcased in the apartment backdrop are logicless. Most of the film’s narration is flat and boring. Comedian Viva Harsha’s comedy is not up to the mark.

As above said, director SR Krishna’s idea is good but he totally failed in executing the film with a gripping and interesting screenplay. Editing is below par as many unnecessary scenes in the first half can be easily trimmed off. Camera work by VJ is just okay. The color texture used in the festival song is good. Music by Meenakshi Bhujang and Sunil Kashyap is not up to the mark. Production values for this low budget film are decent.

On the whole, Virus is a disappointing film from Sampoornesh Babu. Even though the story idea is good, the narration is quite flat and boring. All those who have a lot of time and like Sampoo’s kind of fun, they can try this film out. But the rest can stay away from this film and explore better options this weekend.