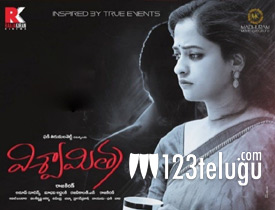 Comedian Satyam Rajesh has turned hero with the film Viswamitra. Directed by Raj Kiran and also starring Nandita, this film has hit the screens today. Let’s see how it is.

Mitra(Nandita) is a sincere girl who works in a corporate company. Impressed by her, Mitra’s boss(Ahsutosh Rana) tries to woo her and plans many problems for her in the office. But every time Mitra lands into a problem, Viswa(Satyam Rajesh) enters the scene and keeps helping her. Getting a doubt about Viswa, Mitra brings in her friend and cop Gopal(prasanna) in action. Who is this Viswa? Why is he helping Mitra? and how does save Mitra from the evil clutches of her boss? To know the answers, you need to watch the film on the big screen.

Satyam Rajesh is good as the leading man in the film. He holds the film well with his sincere performance. Nandita looks beautiful in the Saree look and does well in all the emotional scenes. Both their scenes have been handled well.

The main villain, Ashutosh Rana is the highlight of the film with his villain’s act. He showcases superb emotions in the film through his subtle yet impressive expressions. Jabardasth fame, Chandra was good in his role of Rana’s assistant. His comedy punches work here and there. Rest of the supporting cast was good.

One of the biggest drawbacks of the film is that there is absolutely no novelty in the story. The concept of this film has been used in films like Yendukantha Premanta before. Many horror scenes in the film remind of the recent hits in Telugu.

Camerawork looks shoddy in the film as the visuals are below par. Surprisingly, music by Anup Rubens is horrible and so was the background score. Editing of the film is good. Coming to the director Raj Kiran, he has done a below par job with his execution. He has failed to elevate key scenes and made the film go downhill in the first half itself.

On the whole Vishwamitra is a typical horror thriller which lacks the basic flow. The concept itself is old and the narration is not at all impressive. Satyam Rajesh and Nandita manage to strike a chord with their performance but the rest of the proceedings are so dull that they offer you nothing new. Skip the film this weekend, and look for something more fun and productive.