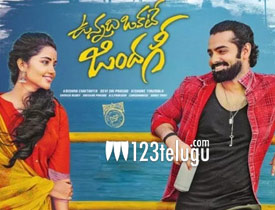 Vunnadi Okkate Zindagi is one film which has been promoted quite heavily. Directed by Kishore Tirumala, this film has hit the screens today. Let’s see how it is.

Abhi(Ram) and Varun(Sree Vishnu) are childhood friends who are very close to each other. The twist in the tale arises with the entry of Maha(Anupama) and good friends become loggerheads with each other. What happened between the two friends? What problem did Maha create? and where does Magi(Lavanya) fit in this entire set up?. To know the answers to all these questions, you need to watch the film on the big screen.

The way the friendship factor is showcased between these two friends is narrated quite well especially in the second half. The way things are showcased convincingly during the climax will surely impress the audience.

Ram is perfect in his role which has two shades. He looks very handsome and also carries his emotions with a lot of experience. All his scenes with Anupama and Sree Vishnu have been showcased quite well.

Anupama is the star of the film as she has a very meaty role. She does superbly in her character and looks quite elegant during her stay in the first half. Her chemistry with Ram has been elevated quite well.

Last but not the least, Sree Vishnu gets yet another meaty role. Though he is not there much during the first half, he makes it up during the later part and makes the film complete. He is a talented actor who has the capability to slip in any role and it will be interesting to see how he picks films from here. Finally, after Pelli Choopulu, Priyadarshi gets a lengthy role and entertains nicely throughout the film.

One of the biggest drawbacks is that the film is a bit slow. The proceedings take their own sweet time to establish themselves. The film needs serious editing to make things crisp and fast.

During the first half, there are not many scenes that elevate the friendship between the two close friends. Some heavy duty emotional scenes should have been added to give real meaning of friendship. Lavanya Tripathi looks out of place as her role has not been dealt well. Also, her look and the way she has been presented looks below average.

One more aspect is you get the feeling that all the emotional and good scenes are kept aside only for the last 10 minutes and up till then proceedings are quite routine. Story-wise too, the film has a very old school story line of two friends landing into problems because of a girl.

Production values by Sravanti movies are top notch. The film has a very pleasant feel as locations chosen, backdrop created, everything looks quite neat. Music by Devi Sri Prasad is just about okay as there was a clear scope of having better romantic and friendship based songs. Dialogues are impressive and give a depth to the film. The camerawork is also very good as it showcases Vizag and its surrounding areas nicely.

Coming to the director Kishore Tirumala, he has done a decent job with the film. He could not narrate the film on a very interesting note as the line chosen itself is very thin. Scenes wise, his execution is good but overall he makes the proceedings a bit simple and not that exciting.

On the whole, Vunnadi Okkate Zingadi is a simple and emotional tale of friendship and love. Good bonding between the friends, Ram and Anupama’s love track and some comedy in the second half are basic assets. The film will attract the youth more as it is targeted towards them. But for the general audience, the proceedings are a bit slow and predictable which makes the film a passable watch this weekend.