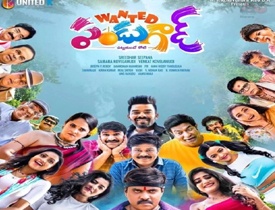 Veteran director, K Raghavendra Rao has presented a film called Wanted PanduGod. The film has all the top comedians of Tollywood in key roles and has hit the screens today. Let’s see how it is.

Pandugadu(Sunil) is a dreaded criminal who escapes from prison and hides in the forest. The government announces a reward of one crore to whoever nabs him. Knowing this, actors like Anasuya, Vennela Kishore, 30 Years, Pruthvi, Srinivasa Reddy, Tanikella Bharani, Saptagiri, Sudigali Sudheer, and Amani, who play key roles in the film embark on a journey to nab Pandugadu. Who is the one who finally catches Pandugadu forms the rest of the story?

One of the assets of the film is the presence of multiple comedians in the film. It has been quite some time since we have seen so many noted comedians in one frame. After a long gap, Brahmanandam does a small role and he is good as the funny doctor. Vennela Kishore evokes a few laughs in the film.

Sapatagiri, Srinivasa Reddy, and 30 years Prudhvi do their best to evoke some comedy. Anasuya is neat in her role and is the one who does not overact. She also gets a solo song and looks glamorous in the film. Sunil gets the main part and he is okay. Deepika Pilli looks beautiful in the songs but did not get much screen space

Wanted Pandugod has been directed by Sreedhar Seepana. Looks like he is just stuck in the good old 90s where such comedies used to have audiences. But times have changed and such over-the-top and silly comedians are not being watched anymore by the audience.

His plot is simple as he creates characters who go all out for money. But his narration and curiosity to create comedy look silly. There are so many situations in the film that are cringe-worthy. In spite of having so many comedians, there is no proper comedy or fun generated in the film.

There was absolutely no need to narrate the film in such an over-the-top manner. The film was promoted a bit in Sudigali Sudheer’s name but he has not much role and was sidelined. The second half and climax are so bad that you would look for exit doors right away.

Production values are okay and so was the camera work. The music and the way heroines were showcased were good. The BGM is worse and the production design looked silly. The editing is fine as the film is only 2 hours long. Coming to the director Sreedhar Seepana, he has done a horrible as more comedy can be witnessed in comedy shows and on Youtube these days.

On the whole, Wanted PanduGod is an outdated comedy caper that is loud and has a few jokes that the B and C center audience might enjoy. But the story and the presence of all the top comedians cannot salvage the film as it is narrated in such a silly manner making it a forgettable watch this weekend.