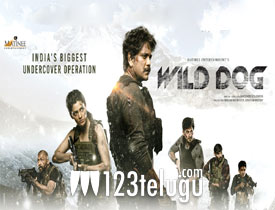 Nagarjuna has promoted his new film, Wild Dog in a very aggressive manner in the last few days. The film is out today and let’s see if the film lives up to the hype or not.

Vijay Varma(Nagarjuna) is a suspended NIA officer who is brought back to nab the terrorist who planned bomb blasts at Gokul chat and Lumbini Park in Hyderabad. Vijay Varma takes up the mission and even traces the terrorists. But things are not that easy as criminal sets base in Nepal. So, how an Indian officer goes to Nepal and nabs the terrorist is the story of Wild Dog.

One of the biggest plus points of the film is Nagarjuna himself. He looks extremely fit as the NIA officer and does well in all the action episodes. His character has been showcased in a realistic manner and Nag does quite well in this setup.

The actors who play Nag’s assistants are quite impressive and do their roles well. Ali Reza gets a meaty role and does well as the commando. If used well, he can be a good actor in Telugu. Sayami Kher enters the scene in the second half and is good in her action-packed role. Diya Mirza as Nag’s wife shines in a few scenes.

The film has a dull first half as nothing much happens during this time. The film starts on an impressive note but the same grip is not continued. Things become interesting only during the interval point. The thrill that a terrorist-based film needs to have is missing during the first half.

The story is simple as the proceedings are straightforward. The manner in which NIA tracks the terrorists need to look gripping but that is not the case here.

The film is based on bomb blasts and the hero’s daughter dies in one such blast. There should be a strong emotion regarding this but is also not created. The villain chosen is dull and has no face value. Wild Dog has so many repeated scenes and the curiosity of what is going to happen next is missing.

So much hype was given about Thaman scoring BGM but he does an average job as his BGM is nothing great. The production values of the film are decent and so was the camerawork. The editing is decent and the action shots have been designed well. The film has neat dialogues and a good production design.

Coming to the director Solomon, he does a passable job with the film. He has chosen a realistic story and set it up well. But his narration is dull in the first half. Solomon makes things gripping in the second half and narrates the film well with decent thrills during the climax.

On the whole, Wild Dog is an action drama that has an interesting premise. Nagarjuna leads from the front and the second half has good thrills. But to enjoy this part, one should sit through the dull first half. This film is made for the general Telugu audience with a new setup and different action. So don’t go in with a mindset of watching a gripping OTT kind of a thriller as Wild Dog has its own pace and style.