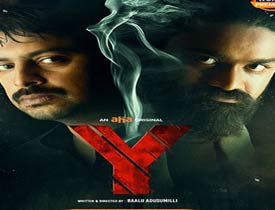 AHA has been bringing some back-to-back Telugu films in the last few months. Next in line is a small film called ‘Y’. The film directed by Balu Adusumilli is streaming now. Let’s see how it is.

Raghuram(Sriram) is a successful director in Telugu films. But one big flop that he directs changes everything and disturbs him mentally. Seeing his crazy situation, Raghuram’s wife convinces him to hire a writer. In comes Balu(Rahul Ramakrishna) who narrates a solid story. Raghuram likes it but the twist in the tale arises when he decides not to give Balu the credit for the story. This changes the course of the film. What will Balu do now? To know that you have to watch the film on the big screen.

Sriram does a solid job in his role as a director. He shows his frustration and irritating nature quite well in the film. Rahul Ramakrishna also does well as a struggling writer. The confrontation scenes between these two have been executed well.

The basic storyline of the film is quite simple and there is nothing novel in it. The engaging narration in such stories needs to be crisp but that is not created in the film. Because of this, there is no interest that is created for the audience.

The music of the film is decent and so were the dialogues. Even though the story is routine, director Balu made it looked in most areas. If he would have worked more on the screenplay and conflict, things would have been even better. The production values of the film are also decent but camerawork was just about okay.

On the whole, Y is a film that has a simple point and is narrated with good scenes until the key twist is revealed. Once that happens, the narration becomes dull and does not create much interest, and ends as a below-average fare this weekend.