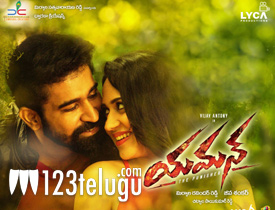 “Yaman” is a Tamil/Telugu bilingual starring Vijay Antony who won over Telugu audiences with his 2016 superhit film Bichagadu. While the film went on to collect more than 20 crores, his next release “Betaludu” did not do well. Now, the music director turned hero returns with his third Telugu release which is being pushed as a political revenge drama. So, let’s see what’s in store for the audience.

Story :
“Yaman” starts out thirty years back in a village where the idealistic Devarkonda Gandhi (Vijay Antony) is in running for the MLA seat. Panduranga, his friend & political opponent, gets him killed and gets elected from the same constituency while Gandhi’s widow commits suicide leaving behind their baby son. The movie then moves to the present in Hyderabad where the son grows up as Ashok Chakravarthy (Vijay Antony again).

An urgent need for a huge sum of money required for his grandfather forces him to go to jail on behalf of someone else.
The story kicks off at this point when he is caught up in the conflict between two rival gangs. At this point, Karunakar (Thiagarajan) steps in as his mentor and helps Vijay overcome his troubles and start his own business. Soon enough, Vijay and Panduranga, who is a powerful minister, ends up in the same political circle.

In parallel, love blossoms between the movie star Ahalya (Mia George) and Ashok over a series of coincidences. The film builds up to a point where Ashok with his political ambitions comes into a direct confrontation with his mentor and also Panduranga. Will Ashok also succeed in avenging the death of his father? Will Karunakar tolerate the growing ambitions of Ashok? The rest of Yaman is about how Ashok goes about fulfilling his ambition.

Yaman has been sold on the name of Vijay Antony who is there in almost every scene of the film. Despite his limited acting abilities, he plays out his role in all sincerity. His character arc of transforming from a common man to a small-time politician is brought out well. Thiagarajan as Karunakar does an excellent job as the manipulative mentor.

The strength of the movie is the screenplay that shows how the three main characters try to manipulate each other. What also works is that the romantic track does not come out as a distraction in the main narrative.

Yaman falters at times when it does not engage the viewers completely in the game that is being played out. In some of the scenes, the viewer might feel that the situations are not engaging and things fall in place inconveniently. Mia George has a very short role that is limited to 2 songs and 5 scenes and she hardly makes an impact.

Though the film is supposedly a Tamil-Telugu bilingual, there is a total Tamil influence everywhere right from the mannerisms to the atmosphere to the actors. Though the director has taken care to camouflage the Tamil signboards, etc, the Tamil feel is hard to miss.

The music by Vijay Antony doesn’t register as any of the three songs had any recall value while the action sequences again were unimaginative. Coming to the director Jeeva Shankar, he should have concentrated on keeping the scenes tighter by adding some more elements of suspense.

On the whole, Yaman is an interesting concept of a political game that is played out between different characters. It holds the viewer’s interest around how Vijay Antony goes about handling the crunch situations around him and takes advantage of the mind-games. If you ignore the slow pace of the film, Yaman merits a decent one-time watch.