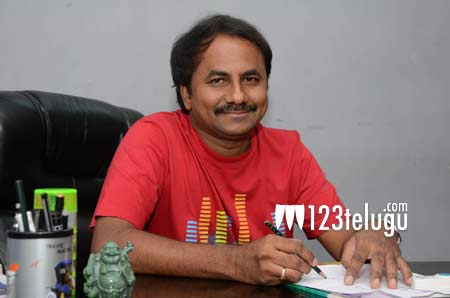 Swamy, made his debut as dialogue writer with ‘Oka Oorilo’ and went on to work for movies like ‘Happy’ and ‘Ullasanga Uthsahanga’. Swamy also tried his hand as a director with the film, ‘Romance’ and also penned dialogues for recently released ‘Drishyam’. On this occasion of the film’s success, he shared his happiness with the media. Let us see what he has to say….

Q) How are you enjoying the success of ‘Drishyam’?

I am very much happy with the success of the film, and the credit goes to entire team of ‘Drishyam’.

Q) Even though the film’s screenplay is good, few logics are missing in this flick. Why do you have to say about this ?

According to me, loop holes are common in any film, irrespective of the director. We can miss the logics, but we can’t miss the emotions in the film. That’s what we did in this film, and concentrated more on emotions of the film.

Q) What do you have to say about the recent controversies about the film ?

Controversies, complaints, settlements are common for a hit film. When a film gets flopped, no one cares about all these. I can only say that, we made this film after taking Malayam remake rights.

Q) For the first time, you wrote dialogues for a family entertainer. Did you face any difficulty?

Q) What about your directors role. Do you have any projects in hand ?

I feel that ‘Romance’ got flopped only because I don’t know vulgarity. When a person deals with something which he doesn’t know, this is what happens. Currently, I am thinking of directing a movie, and have also been offered to write dialogues for a big budget film. I am in a state of confusion as to which one to choose.