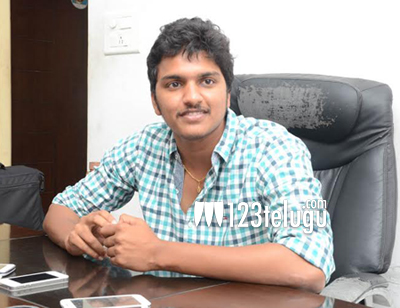 Ra Ra Krishnaiyya has opened to some decent openings all over. This romantic love story is directed by Mahesh Babu P and has Sundeep Kishan and Regina in lead roles. We caught with this young director for a brief chit chat. Let’s see what he has to say.

Q) How is the response for the movie ?

The response has been really good. We got positive reviews from the critics, and the common audience have also liked the film and the openings speak for themselves.

Q) You have based your film in different cultures. Was this pre-planned ?

See, the story was quite simple, and I decided to make it interesting by setting it up in different cultures. That is why we based the movie in Chennai and moved ahead to Kerala also.

Q) What is your favorite scene in the film ?

Q) How did you select Sundeep Kishan for this film ?

I did not select him but he okayed me as the director for this flick. When I was trying for a break, and when my producer took me to Sundeep, he okayed me right away after seeing the show reel.

Q) Cinematography of the film is pretty good. Tell us about that ?

All the credit should go to Sai Sriram. As the film was based in different cultures, me and my cameraman did a lot of ground work and selected locations with utmost care.

Q) How was it working with Jagapathi Babu ?

It is a dream come true for a young director like me. Even while shooting for this film, he encouraged me continuously.

Q) How will this movie help your career ?

After doing this film, I got a lot of confidence in myself, and now feel that I can handle even more bigger subjects in the future.

I am getting a lot of offers, but everything is still in the discussion stages.