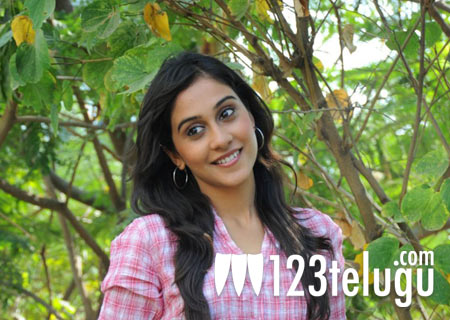 Ever since she was seen in Balaji Mohan’s short film (which formed the basis for Siddharth’s ‘Love Failure’), Regina has been recognized as a talent to watch out for. She later appeared in the Telugu film SMS opposite Sudheer Babu. She is now all set to be seen in Praveen Sattaru’s ‘Routine Love Story’. We caught up with the actress for a brief chitchat. Read on to see what Regina had to say.

Q. How is Routine Love Story different from every other filmy love story?
A. RLS is a very realistic love story that most people will be able to relate to. Its a kind of story most people would have experienced during their teens.

Q. What is your character’s name in the film?
A. I play the role of Tanvi, who comes from a very rich family. She also adapts herself to the wishes of her family and her character is very adorable.

Q. Your character seems similar to the one you played in SMS?
A. Not really. In SMS, the character is more mature. But in RLS, my character is quite immature and spontaneous. Also, the element of dating is not present in SMS

Q. Any memorable/bad experiences while filming?
A. I won’t call it a bad experience, but I had an experience. I fell off in the water along with Sundeep while rafting in Hrishikesh and it was quite frightening. But now that you look back at it, it is more thrilling than bad.

Q. You have worked in Tamil and Telugu. What is the biggest difference you find in the two industries?
A. Except for the language, the two industries are actually very similar. The style of functioning is almost the same. Some Tamil films are extremely realistic with little or no glamour. In Telugu films however, the canvas is bigger. There is more heroism, grander locations, bigger budgets etc.

Q.How was it to work with director Praveen?
A. Praveen comes from a different school of thought compared to most film directors. He gives importance to realism and natural feel in story telling. He has treated each and every character in the film uniquely. With Praveen’s direction, nothing will feel unnatural.

Q. What are your upcoming projects in Telugu?
A. I have a few offers in hand but I have not finalized anything. I am working for a Tamil film currently which is being directed by a National Award winning director Pandiraj.

Q.Who is your favourite star in Telugu?
A. I like a lot of people in Telugu, but if I have to name to name the absolute favourite, it will have to be Mahesh Babu. It would be a dream come true to do a film with him.

Q. Who are your role models?
A. I really admire Heath Ledger’s work. I also look upto Tamil star Surya as someone worth emulating.

Q. How did you end up being an actress?
A. Acting is a passion for me. I made my acting debut in Std. 9 and then I did a Kannada film ‘Suryakanthi’. Then the famous Tamil short film happened, from which Siddharth’s ‘Love Failure’ was made.

Q. What can you tell us about your family?
A. Dad is a retired Government employee. Mom does a lot of things, including working as a HR. I am the only child for my parents but I was never pampered (laughs). My parents are very strict about my education and they insist that I complete my graduation. Only then am I allowed to work as an actress.

Q. What are your expectations from the movie RLS?
A. It will be a very nice entertainer which people can easily relate to. I had good fun while shooting for the movie. We have enjoyable characters in the movie and Sundeep Kishan has done a good job too. I hope people will like it.

With that, we ended our interview of the very adorable Regina.