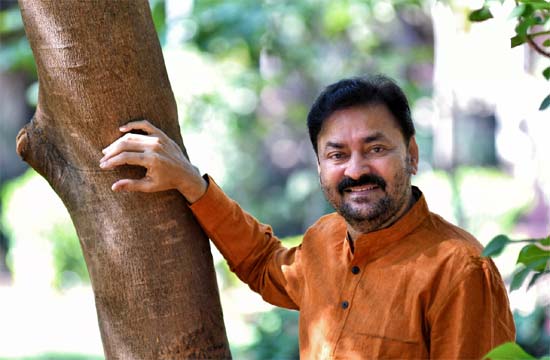 Ananda Chakrapani is one actor who has impressed many with his roles in films like Mallesham, Vakeel Saab, Anaganaga O Athiti and has big projects lined up. We caught up with him for a detailed interview. Here is the transcript.

Of late, you have become a busy actor. How do you feel?

I feel really elated as I am doing some very good work. The industry has been quite welcoming and the makers are giving me good roles to portray. At this age, I am getting good recognition, and if this second innings would have not happened, there would have been a big void in my life.

You have been around for a long time. Tell us about your struggling phase?

I always wanted to be an actor and have a theatre background as well. I made my debut in 1988 with the film Daasi. I also did a film where I played the hero. But as the industry was in Chennai, the opportunities were fewer. I struggled a lot for the next few years and decided to leave the industry and joined Advertizing. I also owned an Ad agency and directed a few of them. Things were not easy for me during this phase but my family has supported me big time and I too did not lose hope.

What kind of a change did Mallesham bring to your career?

This film came to me at a time when I had been nurturing my passion and waiting for a good opportunity. That one role has been appreciated by many and it gave me a new lease of life in the industry.

You are doing mostly emotional roles. Don’t you think you are getting typecast?

Yes, in a way. But because of my performance in Mallesham, things changed a lot. Even though, I was being preferred for father roles films like Anaganaga O Athithi and Vakeel Saab have given me good recognition.

How has the industry responded? Can you share any memorable experiences with any star?

The industry has been really kind. I still remember the day when the great Mohan Babu sir called me after watching Anagnaga O Atithi. His words of appreciation are still fresh in my years. “You are a great performer. Nuvvu Bhale Chesyavayya, industry ki oka Manchi natudu dorikaadu and Chaala Yellu untavu ikkada” he said. Not stopping there, he invited me to his office and even offered me a role in one of his films.

Are there any directors that you want to work with?

I love to work with directors like Trivikram and Koratala Siva. Before starting my second innings, I taught life skills to corporate houses. I am not in a hurry to do so many films. Each film I do should leave a mark. I have gone through a lot in life and use that experiences in my characters. I feel everyone should remember me by my roles.

How are you planning your career? What kind of roles do you want to do?

I don’t want to get typecast in the industry. I am an actor and want to prove my mettle by doing versatile roles. The directors should think of me and write characters. My biggest goal is to win a national award and I am working towards it.

Dear Megha has just been released. I play Sai Pallavi’s father in Love Story and play a very key role in Virata Parvam. I am also doing Sharwa’s Aadollu Meeku Joharlu. Then, there is a film based on farming titled ‘GO111’ where I play the main lead. I am doing films with Suresh Productions, Simba with Jagapathi Babu, and have a few other big projects which will be announced soon.

Are there any upcoming films that will prove your mettle?

Yes. The one with Suresh Productions has me in a crazy role. I want to be a director’s actor and be able to slip in any role they create.