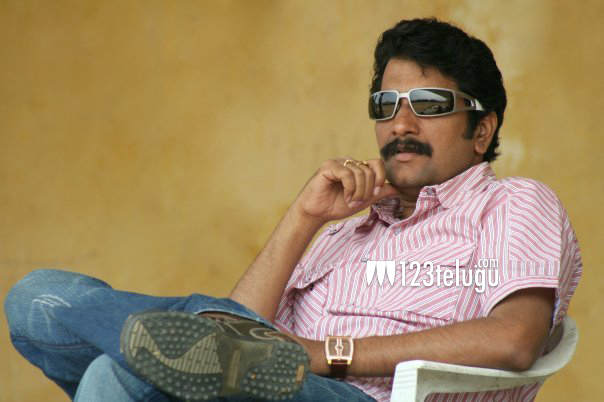 Anil Sunkara is the director and producer of Allari Naresh’s ‘Action 3d’. This movie is the first straight Telugu film to feature Real 3D. ‘Action 3D’ is all set to hit the screens tomorrow across the world. We caught up with Anil Sunkara for an exclusive interview. Read on to see what he had to say about the challenges of making films in 3D, the creative differences between the stereographer and cinematographer and his future plans.

Q. Real 3D in a straight Telugu film has never been attempted before. Why have you taken such a big risk with your debut film?

A. It is not a question of risk. 3D is an upcoming technology. If not today, it will be here tomorrow. We just wanted to be the first people to bring it here. We have seen 3D in horror and action before. But 3D in comedy is something new. Telugu viewers like to enjoy comedy. So we wanted to give them a new experience by giving them comedy with 3D.

Q. Shooting a film in 3D must be a whole new experience…

A. Yes. The soul of the film remains the same, but a lot of other things change. We need to take care of depths and other such things in order to get the right affect. If some shots take 10 mins in a regular 2D film, they may take upto an hour in a 3D film. We need to get a lot of things right. It is a slow and laborious process. We gained a wealth of information with this film. Our learning curve was steep, but once we got the hang of it, things moved at a fast pace towards the end of the shoot.

Q. With this knowledge, do you plan to come up with another 3D film soon?

A. (Smiles). It has been an exhausting journey. I need to take a break and concentrate on the films that are under production in our banner. We may use this knowledge at a later date for another project. Things will become a lot easier in future.

Q. Making a film in 3D is expensive. Instead of choosing one of the top heroes of the industry, why did you go for Naresh?

A. I would not have attempted this film if not for Allari Naresh. As a debut director, I need to have my comfort levels with the hero. I obviously cannot go to a top star as a debut director and shoot a 3D film. Naresh trusts me and we have a very good rapport. He was extremely co-operative while shooting for this movie and if not for Naresh, this movie would have taken another year or so. We asked him to dub repeatedly for some scenes and he never complained. It has been a beautiful journey with Naresh and I will be making one more film with him.

Q. What kind of moral support did you get from the industry?

A. Everyone supported me. In the initial stages, people tried to discourage me. They used to say “Ippudu antha kashtapadatam endhuku andi”. But once we started shooting seriously, people gave us very good support. The film was referred to only as 3D film in film circles. Balakrishna garu used to introduce me as, “ayana 3D cinema teestunnaru telusa”. Mahesh Babu, Sreenu Vaitla and others used to encourage me.

Q. How and why did you get into movie production?

A. I have always been very passionate about Telugu movies. I went to the US in 1995 and even now, my primary business is software. Ram Achanta is a good friend and he is extremely passionate about film production. I personally was quite keen about direction, but I ended up becoming a producer first. I am glad I got an opportunity to fulfil my dream of being a director.

Q. Will you be directing any films in the future?

A. Not for a while. I was excited about ‘Action 3D’ because it presented a nice challenge. In future, if some new technology excites me again or if a nice combination of actors come together, I will consider it.

Q. You brought Keith Driver, an American, to India. How did you convince him to work in India for such a long period of time?

A. It was very easy to convince him.There is a lot of curiosity and respect towards Indian films and people are very keen to work in our films. We initially thought it would be a 7 month project. But it dragged on for more than a 18 months because of many issues. He never complained even once. Keith mixed very nicely with the members of the unit and he showed tremendous professionalism in adapting to tough conditions. He used to work for more than 18 – 19 hours at a stretch without a complaint.

Q. American and Indian cultures are quite different..Any creative differences between Keith and other members?

A. There were some creative differences between cinematographer Sarvesh Murari and Keith. But they were purely over technical matters and they were never personal. As a stereographer, Keith is more interested in the 3D effects which require some long shots. As a cinematographer, Sarvesh was more interested in capturing the emotions of the actors in a better way. That required close up shots. So in the end, we had to strike a compromise.. We went for brilliant 3D effects in songs and concentrated more on emotions during talkie scenes. We are happy with what we achieved.

A. Yes. But we have also concentrated on increasing the scope of Naresh’s target audience. We consider Naresh as our banner hero. If you see our last film ‘Aha na Pellanta’, that movie was quite different from Naresh’s regular projects and it brought him closer to family crowds. With Action 3D also, we are aiming to increase his range as a hero. Regular Allari Naresh fans will not be disappointed as they have plenty of comedy to entertain them.

Q. Selecting Bappi Lahiri as a music director was quite a surprise. Why did you pick him?

A. We have some songs in the film that require Bappi Lahiri’s signature tunes. That is why we chose him. But we also had local talent like Munna Kasi, Chinni Charan, Sai Karthik in the film. Sunny scored the background music for the movie and he did a fabulous job.

Q. The movie’s budget is said to be quite huge. Are you worried about returns?

A. Returns will depend on the success of the film. From our end, we did not spend any money unnecessarily. The money we spent can be seen on screen. The film will be very grand visually. We had to do some re-shoots due to the 3D technology and my own inexperience. That costed some time and money. As a first straight 3D film, we also had to take some unexpected hits. No one could accurately project the costs. I hope the movie does well and brings us good returns.

A. We put in a lot of efforts for this film and the visuals are very grand. Viewers must watch the film in a theater, in 3D to experience the beauty of the film. If they decide to watch a pirated copy, they are missing out on a lot of things. I leave it up to them to make a call.

A. I do not look at films as big films or small films. The effort we put in for both films is the same. I look at the story and the scope of the film. If I have a big hero’s call sheets, I will obviously attempt a big production. If a small hero is more apt for the story line, I will go with a small hero.

Q. Any special message for our viewers?

A. Yes. Please treat this film as a fun film with new technology. You will experience grand visuals and will not be disappointed. I would also like to appreciate 123telugu for doing a very fine job. You have gained a lot of credibility over the last few years by posting genuine news and staying away from gossip. I am a regular reader of the site.

We thanked Anil Sunkara for his kind words and wrapped up the interview by wishing him the very best for ‘Action 3D’. Watch the film and enjoy high quality 3D experience in theatres folks.