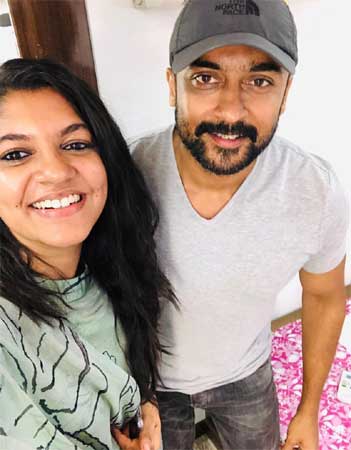 Suriya’s Aakasame Ne Haddura is all set for a big release soon and on this occasion, we caught up with the film’s heroine Aparna Balamurali for an exclusive interview. Here is the transcript.

What is your reaction to the OTT release of the film?

This is a very big film for me and the theatrical release would have changed things in a big way. Also, this film will be a turning point in my career and I am pretty sure that the big release would have worked wonders for me. But I have no complaints as people are not yet ready for theatres and this is the best way forward as our films will have a wider release.

I play Suriya’s wife Bhoomi who always makes her own decisions in life. She is a self-made Madurai woman and always wants her husband to do well in life. In fact, it is my character that pushes Suriya to take up bigger challenges in life. It will connect to every woman and will inspire many once you watch the film.

Sudha mam had a clear-cut idea of how I would look, act, and even move in the film. We had reading sessions which helped us understand our roles better. My whole look at how I even wear my Bindi was designed by Sudha mam. So, her inputs gave me a lot of ideas on how to go about the role.

I met Suriya sir only once in a film function earlier and was a bit confused as to how the shoot would go. But the moment he was on sets, sir made me so comfortable that I forgot it was my first film with him. The best part of Suriya sir is that he gives that space got grow and give your best which I felt throughout the film.

This is a big movie for you. What are your expectations?

Yes, the success of this film can change the equations in a big way for me. I am super confident that this film will be a big hit and will also bring me solid offers. In fact, I did not sign any films and am waiting for its release so that people would see my work and offers me bigger roles and projects. I am not here to play the typical glamorous heroine and would love to d a character role as well but it should have a meaning.

Are you aware of the Telugu cinema?

Not that much. I have done films mostly in Tamil and Malayalam as of now. But I love films like Baahubali and would love to work with the likes of Rajamouli sir in the future. Telugu films are always larger than life and have a good appeal.

I am slowly getting used to the new trend now with this film. In the future, if I get a solid author-backed role, I would love to do it. OTT has given new lease of life for actors like us and the best is yet to come.

This film has a huge canvas and the emotions will bind you completely. With the music, visuals, screenplay, and Suriya sir’s performance, the film will inspire you in every which way as it is made with a lot of heart by Sudha Kongara. Such films are very rarely made in the south.

With that, we ended our interview with Aparna and wished her the best of luck for her future projects.