Exclusive Interview: Asmita Sood- I am yet to find a director who will showcase me well
Published on Jul 1, 2014 6:06 pm IST 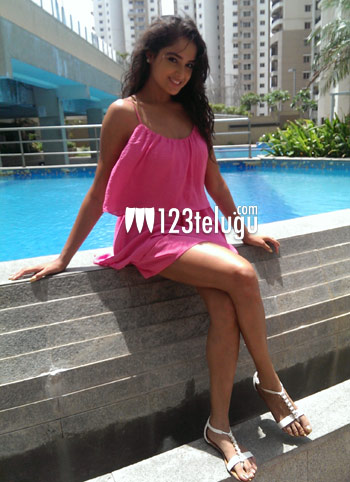 Asmita Sood, has been an exciting name in Tollywood who is slowly making her presence felt. Last seen in Sudheer Babu’s Aadu Madagu Ra Bujji, Asmita is back again with her latest flick Aa Aiduguru. Slated for a release this week, we caught up with Asmita for an exclusive interview in her plush Hyderabad apartment. Let’s see what she has to say.

Q) Your last film Aadu Madagu Ra Bujji did not do well. How nervous are you with this release ?

A) I was pretty disappointed when my last film did not do well. I had put in a lot of hard work for that film, but some how it did not click. With Aa Aiduguru, I am pretty confident that it will impress the audience.

Q) What is the USP of Aa Iduguru ?

A) This film is not a regular commercial film. We have tried something new and have given lot of importance to the story and characters. My film showcases how youngsters who are very careless about life, try to bring about a change and fight for a cause.

A) I play an army officer in the film, and have a lot of scope to showcase my talent. I have even done some stunts in this film, and have worked very hard on my character and look.

Q) Tell us about your beginning, how did you get into films ?

A) I am from Shimla, and was pretty good in my academics. Right from my childhood, I wanted to be in the limelight. Large hoardings featuring stars always attracted me, and some how I wanted to get there. I reached Mumbai and started auditioning for roles. I got selected for the Uninor Ad, which became quite famous. Once I did more Ads, I got more exposure and that is how I got a call to do Brahmi Gadi Katha.

Q ) Off late, how are things materializing for you in Tollywood ?

A) So far, I have done three Telugu films, and a film each in Kannada and Malayalam. I have been getting decent response in Tollywood, and have some exciting projects which I will soon announce.

Q) How are you working on the language barrier. How tough is it for you ?

A) Initially, I faced a lot of problems. But now, I have learnt the language and do not use any prompting.

Q) You have not faced much success with your films. Does that get you bogged down as an actress ?

A) My first film with Varun Sandesh was a decent hit, and I was noticed quite well. Some times things do not go accordingly. But I strongly feel that I am yet to find a director who will showcase me well.

Q) Speaking of directors, do you have any specific directors with whom you want to work ?

A) I would love to do a film with YVS Chowdary and Krishna Vamsi. The way they showcase their heroines is out of the world.

Q) Tell us about your future projects in Tollywood. Any Bollywood offers in the pipeline ?

A) As of now, I am involved in a couple of projects which I will announce soon. When I signed my first film, I never knew that south industry was so huge and had so much for me to do. Now after doing five films, I am taking my career seriously and am totally concentrating on south films completely.

Q) Who is your favorite actor in Tollywood ?

A) I am quite friendly with Allu Arjun, and simply adore his dancing and acting capabilities.

With that we ended our interview with Asmita and wished her the best of luck for her future.