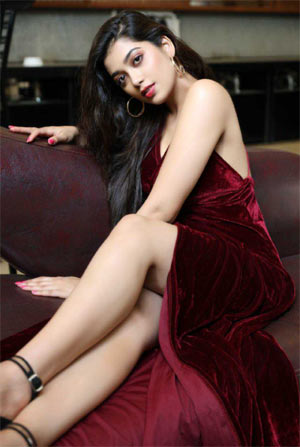 Continuing the lockdown interview series, today, we bring you an exclusive interview with talented actress Digangana Suryavanshi. She speaks to us about her career, Seetimaar, Bollywood films, favorite actor, and much more. Here is the transcript.

What were you doing when the lockdown was announced?

I was at the Mumbai airport on my way to Hyderabad to shoot for Seetimar. Luckily, I got a call that my shoot was canceled and I came back home safe. I have been reading a lot and have also been looking after my fitness apart from spending time with my family which I don’t get to often.

Tell us about your role in Seetimar?

I am cast opposite Gopichand in this film and play a typical girl from Andhra’s small town. I have a very interesting role that is coming out well and will surely bring me recognition. The entire unit and co-stars are so friendly and I am having a great time shooting.

I am in talks for a Telugu film and two other Tamil movies whose process in on. Once the lockdown is over, I will reveal them officially.

Yes, I always wanted to. I remember my mom crying watching those daily soaps and I used to ask her why she was crying. Then, she told me that the people on screen are doing great acting and it is not true in real life. So, somehow, during that age, the acting word stuck deep in my head.

Your first film was Hippi. What’s our opinion on Tollywood?

Right from the co-stars to the unit members of all my films, everyone has treated me well. Touchwood, the media, and critics have always spoken high about my roles in my films. I am getting good roles and feel Tollywood is the place where I belong and am looking for a big inning here.

You are famous on TV. Tell us the transition to films?

I started acting from the age of seven, did a lot of television, and was pretty famous too. But like everyone I wanted to challenge myself and become a full-time film actress. Many in the TV industry said not to leave TV as it was such a lucrative career. But I believed in myself and here I am doing films all over the country.

Tell us about your Bollywood career?

In Hindi too, I am getting decent offers. In fact, I am doing a big period drama with a known star in Hindi. We will announce the film soon and I have pinned a lot of hopes on the film as it will give me a new break in Hindi.

Any inspiration to become an actress?

I am a bit old school and always loved Madhubala, Rekha and Sridevi Ji. I wanted to be like them and do both forms of cinema like the commercial and art by striking a good balance.

Your favorite actor in Telugu cinema?

I am a huge fan and admirer of Mahesh Babu. I have seen all his films and feel that he is the most handsome and talented actor in Tollywood. I also love Ram Charan as an actor.

I want to do mass films in the south as I love being in the hearts of the people. Commercial cinema is where my heart lies as it has a good reach and many in the family can connect. I am game to doing different characters in the south.

With that, we ended our interview with Digangana and wished her the best of luck for her future projects.