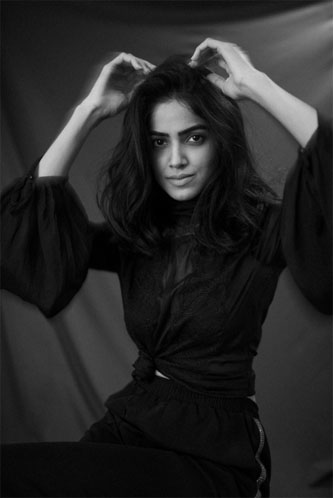 Drishika Chander is an actress who is getting good acclaim for two of her films Manasanamah and Bucchinaidu Kandriga. We caught up with her for an exclusive interview and spoke to her about the film and future projects. Here is the transcript.

How is the whole response to your film Bucchinaidu Kandriga?

Frankly, the response has been mixed. But my performance and role are being appreciated a lot. There are a lot of people who are loving the film but the one thing which is made me happy is that a wide variety of audience is getting to see my work which is such amazing for me

I got to play this village belle in my debut film itself which is quite great and fulfilling. I had never been to a village before in my entire life and thus it made my preparation a bit difficult. I had to unlearn a lot, catch on to the slang and do things my way and give the character of Swapna a twist. Be it the emotions, look, or performance it was challenging for me but the way I am being praised I feel that I have done a good job.

Do you miss the theatrical response to your work?

Yes, I do a lot. My first short film Manasanamaha was also released online and now this film came out on OTT. I am dying to have a proper theatrical experience where I can sit and watch the film along with people. The response, going to promotions, and being out there, I am missing it badly, and being a new actress, it is quite important for us to be in the public eye.

I am born and brought up in Hyderabad. My mom, Deepa Chander is from the industry and worked in over 100 films as a costume designer and even won a Nandi award. So, I had basic connections in the industry. I was in New York for a while and worked there. Once I decided to become an actress, my mom supported me completely and I started doing theatre in Hyderabad.

You won a lot of appreciation for Manasanama. How did you bag that film?

As I was working in theatre background, the director Deepak spotted me there and roped me in. It was a small film but the way he projected me was superb and this also helped me get my second film Bucchinaidu. In fact, one of the editors, Marthand K Venkatesh garu suggested to me for Bucchinaidu after seeing me in Bucchinaidu.

Growing up did you have any inspirations?

I did not watch that many films but witch whatever I watched, I was inspired by something or the other. I cannot say that one actor or actress inspired me, But good performances and stand out films always kept me interested in films and that is the reason I am here n the industry.

How are you planning your career ahead?

Till now, I have had not theatrical release and I am dying for one. I am getting decent offers and will sign a few films soon. For me, the role is important and I am not particular about the subject or language of the film. My character should stand out and help the film.