Exclusive Interview : Kalyani Koduri – I feel that I have finally arrived now
Published on Sep 1, 2015 7:46 am IST 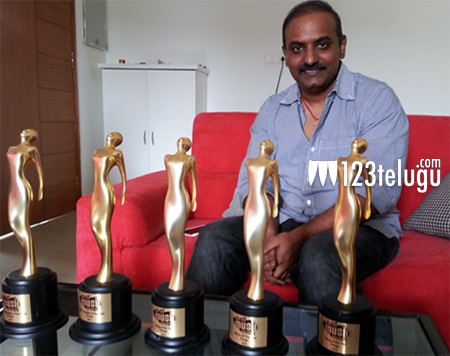 Music composer Kalyan Koduri is on a all time high. His film, Oohalu Gusagusalade bagged several awards at the recently concluded Music Mirchi Awards. On this occasion, we caught up with this very down to earth and ecstatic musician for an exclusive interview. Let’s see what he has to say.

Q) Did you sleep well. Has the hysteria of these awards sunk in yet ?

Words cannot express what I am going through right now. This is probably the biggest moment in my life and I am super thrilled with all the awards my film has won.

Q) Did you ever imagine that you will win so many awards in a single event ?

Frankly speaking, I expected a few awards. But winning so many is something out of this world. All my hard work, dedication and patience have finally paid off. I can now happily say that I have finally arrived in the industry.

Q) Do such awards give you a high ?

Obviously. I have been in the industry from quite some time now and have never been nominated for any award till now. I used to get disappointed after not seeing my name in the nominations. But these awards have made my life and I clearly understood one thing that audience are the real judges and will definitely appreciate if you do good work.

Q) Very few know that you are M M Keeravni’s brother. Why is that so ?

Basically, I am a very shy person and do not feel the necessity to use my brother’s name to grab work. I feel that offers should come in seeing my talent and track record.

Q) What kind of inspiration do you draw from your brother ?

I have worked under my brother for eight long years and have learnt a lot from him. The way he conducts himself and works according to the need of the project and producers is something I have picked up a lot.

Q) Out of the many awards which you won, which was the most satisfying one ?

Definitely the best music composer was the most satisfying. Receiving the award from Super star Mahesh Babu was icing on the cake.

Q) A lot of credit should go to Oohalu Gusagusalade’s director Srinivas Avarsarla. What do you say ?

Yes ! He shot my songs wonderfully on screen. It is only the visuals which enhance the beauty of the song and lyrics.

Q) You have done very less films till date. Why are you so picky ?

I am not picky at all. Sadly, after the success of Ashta Chamma and Ala Modalaindi, I did not get much offers. What ever came my way, I gave my best. Hopefully, this unique recognition will bring me more accolades and interesting work.

I have Teja’s Hora Hori, Nandini Reddy’s next and Varahi’s upcoming film in the pipeline.

Q) Tell us your association with Baahubali ?

I have done sound mixing for many of Rajamouli films. When he decided to have Dolby Atmos for Baahubali, he went to Mumbai in search of better technology. After seeing a few rushes of the film, he was not satisfied and asked me to supervise the proceedings. I worked for nearly a month along with my brother and the final output is for everyone to see.

Q) What kind of response did you get from Rajamouli for your work ?

After the initial sound mixing was done, Keeravani, me and Rajamouli had a special screening in one of the theaters in Mumbai. Once he saw the final output, he gave me a huge hug and said that all his two years of hard work looks superb with the terrific sound mixing. That was the biggest compliment I ever received till date.

Q) Why are you always associated with soft numbers. When will you compose big budget mass numbers ?

I am always ready to compose any kind of music. But the offers that have been coming in are only for soft numbers. However, I feel that romantic numbers are my USP and have brought me till here.

Q) Why did you change your name to Kalyan Koduri ?

It was more of a personal reason than a astrological one. Even before when I was Kalyani Mallik, I gave hits and after the name change I have had hits. So there is nothing in name and everything is destined to happen.

Q) Do you have any ideal director with whom you want to work with ?

I admire Trivikram and would love to work with him. Sukumar and Chandrasekhar Yelati are also my other favourites.

Q) Finally, what do you have to say to the audience ?

After all these years, I feel that audience are the ones who have loved my music and brought me till here. I personally thank each one of them from believing in me and supporting me right through my career.

With that we concluded our exclusive interview with Kalyan Koduri and wished him the best of luck for his future endeavors.